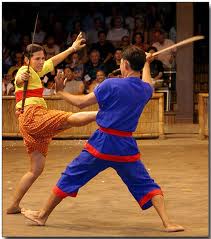 In ancient times, Krabi Krabong was a system of attack and defense devised by idle warriors to practice and test their skills as well as to keep themselves fit and competent for battle. On the battlefield, those honed techniques became whirlwinds of destruction.

Krabi Krabong though is not an antiquated discipline whose only contemporary value is as a form of entertainment, it is a living martial art. Though in his teaching Por Kruh places a great deal of emphasis on the performance aspect of the art; when he speaks of Krabi Krabong he dwells on its great utility. Modern weaponry has changed the face of war, making large scale conflict with swords and spears a thing of the past. Yet the weapons of Krabi Krabong are for the most part silent ones and as such still warrant themselves a place in contemporary warfare. Though the system may look deceptively simple, one must remember that it was a combat oriented art. Arjarn Jason Webster, the first American gold sash graduate of the Buddhai Sawan, explains the nucleus of the system,
” This Apparent simplicity, on the surface of the art, reflects the underlying emotion inherent in it. That is the quick, economical destruction of the opponent. bearing in mind that Krabi Krabong, and its offspring Muay Thai, evolved from Thais defending their homeland and not wanton imperialism or inter-tribal conflict. Therefore, at the core of the Thai martial arts exists the belief that if fighting must take place, the wholesale destruction of the opponent is warranted – and in the quickest, most powerful fashion. It is due to this aspect that the Thais and their martial arts are so highly respected for their fighting spirit and ferocity. The Thai martial arts embody these emotions at their center but contain many complex movements requiring grace, agility and skill. Though based only on a few tenets – such as power, speed and simplicity – the art utilizes its techniques in combinations and variations of which there are endless permutations. The goal being the immediate, natural response to the attack with quick, decisive strikes to incapacitate expediently.” 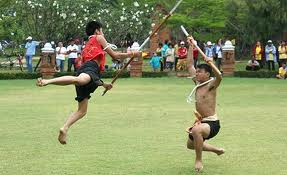 Students begin training at the Buddhai Sawan by learning the empty hand techniques of the original bare knuckle Muay Thai. Through line drills once taught to the military, the students learns the basic kicks, punches, knees and elbows common to Muay Thai He will then progress through the original full length Wai Kruh and Ram Muay and be schooled in the binding of the hands with rope. What is essential about training is that the empty hand techniques will later be inserted into the weapon fighting. The techniques learned must be strengthened considerably so he can deploy them rapidly and with precision during a fast exchange. In addition, empty hand against weapons will also be taught as the practitioner’s skill level progresses. These basics will prepare the practitioner to begin training in the first of the three weapons taught: the Daab, Daab Song Mue and the Krabong.