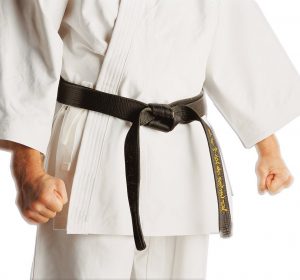 At Enso Martial Arts we sell a variety of Karate Gi’s. We sell black and white, lightweight and heavyweight karate gi, not just for Karate but for a range of Japanese and Korean Martial Arts.

In this short article we’ll be talking about the White Heavyweight Karate Gi or the European Cut Karate Gi.

Firstly let’s look at what distinguishes it from other Karate Gi. Obviously being white means styles such as Ninjutsu would not usually use it, preferring black gi’s as the norm. Also it is made from 14oz cotton or canvas, which has a much heavier feel than the standard beginner or lightweight gi’s. Also the cut or shape of the gi is designed for a European built person. The Japanese Cut being designed for a typical Japanese build. When Karate first came to Europe and the UK, all Karate gi’s were from Japan and so all made for Japanese people. This meant that Europeans wearing this style would have shorter sleeves and trousers. Some people really like this look so we still supply this shape but technically the Japanese do not wear their Gi’s like this. However in the Western Karate world it is still seen as a ‘traditional’ cut. However that is not the style we are talking about today.

The heavyweight Karate Gi is made from ‘brushed cotton’, which gives silky type feel to the Gi against your skin. Much less harsh than the majority of Karate Gi on the market, also because the canvas is good quality it bends easily not restricting your movement in anyway, but still is tough enough to provide a good ‘snap’ when kicking or punching.

Quality of the build is important when choosing a Karate Gi, because it will massively effect the longevity of the Karate suit. This European Cut Karate Gi is almost over engineered, with in some places, such as the bottom of the top and trousers, 7 rows of stitching. Maximum reinforcement that will take more punishment than is expected from numerous hard karate sessions and competitions.

So who might want to buy one of these lovely Gi’s?

It is really a Kata Competition Gi. It looks very smart, irons well and makes as great ‘snap’ from strikes. You’ll look the business so you’ll need to train even harder to make your Kata match it. They are also perfect for hard training sessions, having the strength to endure the punishment. We also get a lot of people who buy them as a winter Gi for when those training halls are freezing cold. Finally we get a lot of Black Belt’s who spend a lot of their time teaching rather than training buying them. One it’s nice to look good when teaching but also stay warm and cosy.

These suits are available in all sizes they, start at 1/150cm and go all the way up to 7/200cm. These are quite a generous cut so always worth trying on e on if you can and if you’re not sure you can always call us for advice on 0117 9425832 or email us on shop@ensomartialarts.com

Hope the information is useful.

Which Japanese Sword to Buy and accessories?

What Karate Gi should I buy?