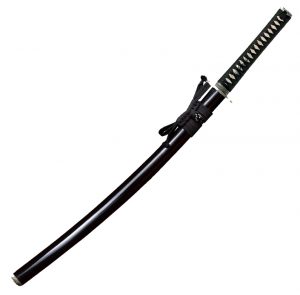 Read here about the range of Katana at Enso Martial Arts shop including the Cold Steel Katanas. The samurai sword is arguably the most recognised bladed weapon in the world. Swords have always been a symbol of strength and status, but the katana, to me, epitomises this statement. For the majority of us, the Samurai were solomon, honourable warriors, with rigid routines and ceremonies, which they were bound to follow, through strict disciplining of their minds, bodies and spirits.

Though their level of honour was much more subjective than we would like to believe, the importance of their status in society was not. Being the toughest and the strongest was of the up most, and losing face, could result in death for anyone who dared to insult them.

The craftsmanship of their weapons could say more than their actual skills. If a Samurai had a well made katana, it would suggest that their fighting ability matched the high level of which it had been made. Anyone with an interest in Kenjutsu (the art of Japanese swordsmanship) will have likely seen Quentin Tarantino’s glorious ‘Kill Bill’ films, and will know of Hatori Hanzo; considered (in the films universe) to be the worlds greatest Katana black smith. When his name is mentioned, people automatically believe that the wielder of one of his works, is a master “in the exquisite art of the Samurai sword”.

Known for their durability and attention to detail in all their products, ‘Cold steel’, is a brand with over thirty years of experience in hand made weapons, ranging from modern ‘peacekeeper’ training knives to histories most iconic weaponry. Their Katanas are hand crafted carbon steel, using traditional techniques on the sword, handle and saya (scabbard). They may not have been forged in sixteenth century feudal Japan, but these are some the best made Katanas in the world today.

At Enso, we have a range of Cold Steel Katanas. Pricing can be from £160 (the Asano Katana) to £700 (the Emperor Katana). This price range is due to the amount of material and time that has gone into each sword.

As incredible as they are to hold and use, these are serious weapons, and as so should always be handled with respect.

For more details and video examples of a Cold Steel katanas capability, please go to our website: https://shop.ensomartialarts.com/coldsteel-cold-steel-emperor-katana.html

What Tabi Boots should I wear?

What do I need for Karate? Everything you need

Which Japanese Sword to Buy and accessories?