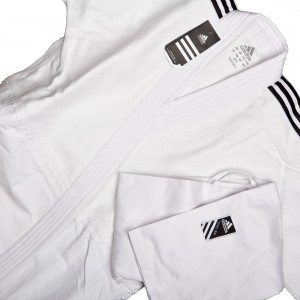 Can you use a Judo Gi for BJJ or BJJ Gi for Judo? That’s the question this week. I had a guy in the shop the other day that was looking to train in both Judo, which he had done for along time, and Brazilian Jiu Jitsu.

He wanted advice on which Gi would be best for training in both. At the beginning, as he was starting out in BJJ, he wanted a BJJ Gi. “Will this be okay for Judo?” he asked. “Sorry no, not really”

The problem is that BJJ doesn’t have the same kind of throwing intensity and repetition that Judo has, so the BJJ Gi lapel isn’t made anywhere near as strong. Being a big bloke it was obvious that the BJJ Gi would tear after a few sessions of Judo.

My thought on Can you use a Judo Gi for BJJ?

Personally, I think you’ll always be better off with a Judo Gi for BJJ, than the other way round. The only downside being the bottom part of the Judo Gi isn’t a strong or as reinforced as a BJJ Gi will be. To stay strong when using the Gi for chokes, etc. but it will be a better option.

Make sure you spend decent money on the Gi, something the Adidas Contest Judo Gi are a great option. They are no too heavy, but strong and well made. But at the end of the day really you need clothing fit for purpose, so training in two styles you need to buy two Gi’s.

Also don’t forget you can buy separate Judo Trousers too, when you rip the knees out of them, save having to buy a whole new Gi all the time.

You can browse all our Judo Gi for sale here at Enso Martial Arts Shop in Bristol www.ensomartialarts.com

Some Recommended All Women Classes in Bristol July 2018