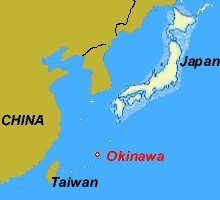 From the dawn of Karate history in Okinawa, there existed a natural method of fighting called Okinawa-te (or Okinawa hand). The first expansion period of karate in Okinawa occurred approximately 500 years ago when King Hashi of the Sho Dynasty reunited the three principal kingdoms of the Ryukyu Islands and unified the entire archipelago. In order to maintain authority without a large military force, King Hashi decreed that the carrying of weapons would be a crime against the kingdom. Without weapons, secret training in bare-handed fighting methods increased greatly in popularity among the peasants and grew much more sophisticated and efficient.

Around 1600 A.D., the Japanese Lord of Satsuma attacked and conquered King Hashi’s unarmed kingdom. Just as King Hashi had done before him, the Japanese invader in 1609 prohibited the natives’ right to possess and carry weapons to protect his domination. Their reaction produced the second period of development of karate in Okinawa. Secret training in Okinawa-te again expanded, becoming even more deadly. Techniques were also developed using farm implements such as sticks, sickles, chains, and iron bars, which were not forbiden to the peasants. Thus, the techniques of Bojutsu, Tonfa, Nunchaku, and Sai were born. 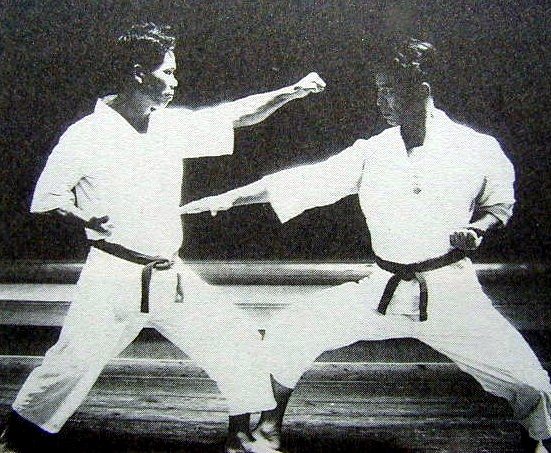 During this period the family of the Shimazu, Lords of Satsuma in Southern Japan, endeavored to promote commercial and cultural exchanges with the outside and to open the southern part of the country to China. This policy combined with the geographic closeness of the Ryukyu Islands to China greatly accelerated the influence of Chinese fighting methods on Okinawa-te.

About 1735 the Chinese influence on karate was first mentioned in a local history book, Õhshima-Hikki (the word Õhshima means “big island” and Hikki means “note). The book tells of a man named Sakugawa who traveled to China, mastered karate and returned to Okinawa to teach his methods.

Soon other Chinese delegates came to Okinawa. The principal ones were Iwah, Waishingzan, and Ason. The latter restricted the number of his students to a handful, the most famous was Master Tomigusaka who was at the peak of his fame during the youth of Master Gichin Funakoshi. 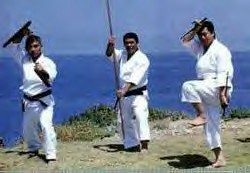 Anko Itosu and Anko Azato, lived in Okinawa during the 1800’s. Besides being karate masters, they both taught various skills to a very special student. In 1922, having mastered [these] two major styles in Okinawa, Master Gichin Funakoshi, then president of Okinawa Association of the Spirit of Martial Arts, was chosen to demonstrate karate at the first National Athletic Exhibition in Tokyo. This led to the introduction of the ancient martial art to the rest of Japan. At the urging of friends and officials, he remained in Tokyo to teach. Today, he is recognized as the most important influence in the development of contemporary karate. Training became an education for life. His authored “Karate-Do Kyohan” and “Karate-Do: My Way Of Life”.

American Karate - American Karate History is very unique. Karate Mainly made its way to America Officially by US service men who learned their chosen art from first… Continue Reading

American Kenpo - American Kenpo History started with it's creation with American Edmund Parker, three significant events are always cited in the development of almost every style of… Continue Reading

Goju Ryu Karate - In the 19th century Shuri-te and Tomari-te merged into Shorin ryu, which was the start of the Goju ryu Karate History. Grandmaster Kanryo Higaonna was… Continue Reading

Isshin Ryu Karate - Isshin-ryu was founded by one of the great karate masters, Tatsuo Shimabuku, and is derived from several of the other, older classical styles. Master Tatsuo… Continue Reading

KARATE - From the dawn of Karate history in Okinawa, there existed a natural method of fighting called Okinawa-te (or Okinawa hand). The first expansion period of… Continue Reading

Kyokushin Karate - Kyokushin Karate started with Sosai Masutatsu Oyama was born on July 27th, 1923, in a village in Southern Korea. At the age of 9 whilst… Continue Reading

Shorin Ryu Karate do - Shorin Ryu Karate Do History started with Matsubayashi-Ryu karate did not exist before Nagamine Sensei founded it, it's beginnings had existed for hundreds of years… Continue Reading

Shotokan Karate do - Shotokan karate history was started with Gichin Funakoshi (1868-1957) in Tokyo in 1938. Funakoshi is considered to be the founder of modern karate. Born in… Continue Reading

Wado Ryu Karate Do - Wado Ryu Karate History officially began in May 1934 when Hironori Ohtsuka registered his own style of Karate, which he called "Wado Ryu" and was… Continue Reading
Tags: japanese martial arts, Karate