1) Bodhidharma brings Kung Fu to Shaolin Temple in China, 520 AD.
2) A Shaolin monk named Bosatsu fled China and arrived in Kumamoto, Japan, around 1235, and taught Kung Fu to the Yoshida clan.
3) James Masayoshi Mitose returned from Japan to his birthplace in Hawaii, in 1936, after learning Kosho Ryu Kempo, from his grandfather, Sukuhei Yoshida.

These three events are pivotal to the story of American Kenpo and all of the off-shoot styles of students of James M. Mitose. Unfortunately, as we shall see, none of it is true!

Note: The terms Kenpo and Kempo are used interchangeably depending on how individuals chose to represent it in their various writings. The spelling does not change the meaning in any way.

The Many Faces of American Kenpo

The same story is told by most self-proclaimed historians of American Kenpo (Karate) and all of its “cousins”: 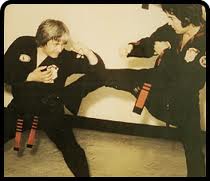 As the story goes, in 1921, at the age of five (some say three), James Masayoshi Mitose was sent to Kyushu, Japan, from his birthplace in Hawaii, for training in his ancestor’s martial art. Some versions of the story say this training came from his uncle, a Kempo master named Choki Motobu, while others say he was taught by his maternal grandfather, Sukuhei Yoshida. For fifteen years, he studied this art, which was said to be a direct descendent of the original Chuan Fa. After completing his training in Japan, Mitose returned to Hawaii in 1936, proclaiming himself to be the 21st Great Grandmaster of the Kosho Ryu Kempo system.

[Side Note: It seems to me that attaining the title of great-grandmaster in only 15 years is quite a phenomenal feat. But how long does it take to master a non-existent martial art?]

James Mitose remains the one truly enigmatic figure in all the history of American Kenpo. The techniques Mitose shows in his book bear little to no resemblance to Japanese Jujutsu techniques. Even Japanese Kempo systems, while influenced by Chinese Chuan Fa, were still primarily Jujutsu systems. Mitose writes in the beginning of his book, “Masters of Kenpo and also the true masters of jiu-jitsu number their arts, in the order of their importance, as follows: 1. Punching 2. Striking 3. Kicking 4. Throwing and Locking.” This goes totally counter to all Japanese Jujutsu systems. All traditional Japanese systems of Jujutsu place vastly greater importance on throwing and joint-locking than they do on punching, striking or kicking.itose opened the “Official Self-Defense” club in Honolulu in 1942. It was here that he eventually promoted six of his students to black belt (instructor status); Thomas Young, William Chow, Edmund Howe, Arthur Keawe, Jiro Naramura, and Paul Yamaguchi. When James Mitose stopped teaching in order to pursue his “religious studies”, he left his Hawaii Dojo in the hands of Thomas Young. 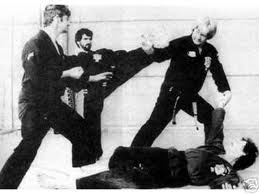 There are several factors that make it seem likely that Mitose did not learn or teach Japanese Kempo at all – but rather Okinawan Karate. First, the Japanese Kempo systems that do have a documented lineage do not make a big deal out of being descended directly from the Shaolin temple and Chinese Kung Fu. The Okinawan Karate systems, on the other hand, do make such a claim.

Also, Mitose stressed the importance of Makiwara training for punching and kicking. Strikes and kicks performed on a Makiwara (a board wrapped with cloth or rope) are featured in the beginning of Mitose’s book. The Okinawan systems are unique in their use of Makiwara – Japanese systems did not use it.

It is possible that Mitose never went to Japan. If so, then he would have been in Hawaii when Choki Motobu (the man Mitose claimed to be his uncle) arrived there in 1932. Motobu, Mizuho Mutsu and Kamesuke Higaonna were all experts in Okinawan Karate and visited from Japan to try to help spread Karate to Hawaii. Motobu was detained during his visit, but Mutsu and Higaonna taught for a period of time. It seems quite likely that if Mitose did not, in fact, live in Japan for many years, he could have trained instead with Higaonna and Mutsu in Hawaii. It appears Mutsu may have had at least some training with Motobu. These connections could explain Mitose’s reference to Motobu as the “great master” in his book. 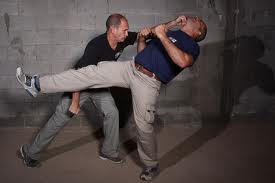 James Mitose’s book can be entirely reproduced (plagiarized, in other words) from books by Motobu and Mutsu that came out a decade or more before Mitose’s book. In all of the pictures from Mitose’s book of Mitose striking and kicking the makiwara, we see that he is exactly reproducing pictures Motobu included in his book. And nearly every technique Mitose shows in his book can also be found in Mutsu’s book. Mutsu’s book is widely considered the definitive authority on classical Okinawan Karate – more complete in several ways than even Funakoshi’s books.

A Sad Turn of Events

Finally, in the most bizarre twist to the whole story (and the biggest stain on the history of American Kenpo), Mitose was eventually sent to prison for murder, attempted murder, conspiracy to commit murder, fraud, grand theft and several other charges arising from swindling several people out of hundreds of thousands of dollars. It seems that in addition to being a murderer, he was a liar, a cheat, and a thief. Is that so hard to believe after the lies he told about his martial arts training? Yet almost everyone associated with American Kenpo, and all of the Mitose off-shoots today, still regard him in an almost ‘god-like’ status, believing everything he said and wrote about his past and his martial arts training. It’s sad, especially in light of all the facts.

It was all an elaborate hoax. James Mitose DID NOT learn Japanese Kenpo, as he claimed. Somewhere (we still don’t know where) he learned, and taught, Okinawan Karate. Whether he learned this art from Mutsu, Higaonna and Miyashiro, or whether he simply learned from Mutsu’s and/or Motobu’s books remains unknown. But based on the evidence, it is quite certain that the martial arts of James Mitose, and the foundations of American Kenpo, were purely Okinawan in origin.

Yet one fact remains…

No matter the history of James Mitose and his martial arts, almost every style of Kempo/Kenpo that exists in North America today can trace its lineage to this one man.

Next we have another link in the chain of American Kenpo, William Chow. 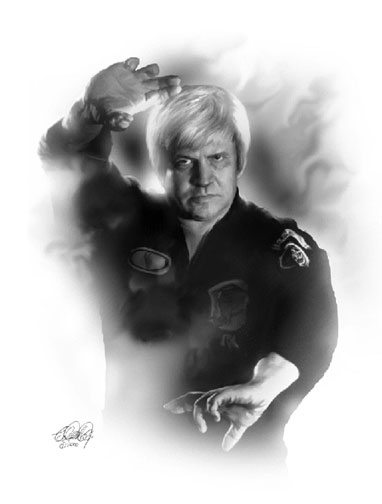 William Chow is considered by many to be responsible for the greatest exposure of Kempo to the general public. William K.S. Chow studied “Kempo” under Mitose for several years and previously (according to Chow) had learned his family art of Kung Fu from his father, a “true Shaolin monk”. Chow supposedly united, like many Kempo masters before and after him, the arts of Kosho Ryu Kempo and his family Kung Fu to form a new art which would eventually be referred to as Chinese Kara-Ho Kempo Karate. In 1949, Chow had attracted a number of students to his own teachings and opened a Dojo of his own at a local YMCA. To make a distinct variation from Mitose’s Kempo, Chow referred to his art as Kenpo Karate (the official Romanization of the character). Throughout the next few decades, Chow made many innovations to the system, including the use of circular techniques of Kung Fu as well as various kata or forms.

No one will dispute that William Chow was a great teacher. Unfortunately, it would seem that Mr. Chow also has some skeletons in his closet. There has been some debate over William Chow’s martial arts training prior to studying Kenpo from James Mitose. Some sources say that William Chow’s father not only was NOT a Shaolin monk, but did not know any Kung Fu. Others, also, state that Mr. Chow had no martial arts experience prior to training in Kosho-Ryu Kempo, but trained widely in other arts only AFTER starting Kempo. One example of this can be seen when William Chow sent one of his brothers to learn Danzan Ryu Jujitsu in order expand the family art. Another group puts forth that while William Chow’s father was not a Shaolin Monk, he did know “some” Kung Fu that he taught to his son.

Finally, we come to the heart of American Kenpo, Ed Parker…

One of Chow’s best known students was a Hawaii native named Edmund Parker. Ed Parker was one of the most significant figures in the current tale of modern Kempo. In 1954, Ed Parker earned his black belt in Chinese Kenpo (this is what William Chow was calling his art at the time). Mr. Parker moved to the mainland and opened a dojo in the Hollywood area, allowing him to teach his art to the likes of Elvis Presley, and Steve McQueen. In 1964, when he held his first tournament, he was already widely known to the American public. Ed Parker further refined and defined the techniques of Kara-ho Kempo, till he perfected his American Kenpo Karate system.