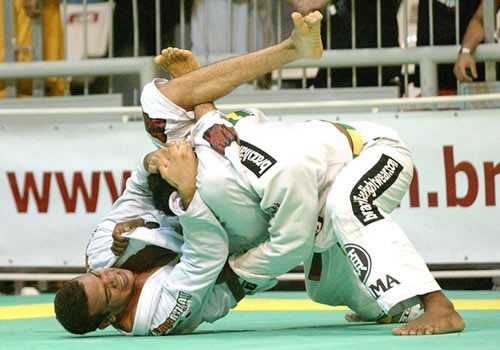 In the mid-1800’s in Japan, there were a large number of styles (“ryu”) of jiu-jitsu (sometimes spelled “jujitsu”). Techniques varied between ryu, but generally included all manner of unarmed combat (strikes, throws, locks, chokes, wrestling, etc.) and occasionally some weapons training. One young but skilled master of a number of jiu-jitsu styles, Jigoro Kano, founded his own ryu and created the martial art Judo (aka Kano-ryu jiu-jitsu) in the 1880’s. One of Kano’s primary insights was to include full-power practice against resisting, competent opponents, rather than solely rely on the partner practice that was much more common at the time.One of Kano’s students was Mitsuo Maeda, who was also known as Count Koma (“Count of Combat”). Maeda emigrated to Brazil in 1914. He was helped a great deal by the Brazilian politician Gastão Gracie, whose father George Gracie had emigrated to Brazil himself from Scotland. In gratitude for the assistance, Maeda taught jiu-jitsu to Gastao’s son Carlos Gracie. Carlos in turn taught his brothers Osvaldo, Gastão Jr., Jorge, and Helio. This was the start of Brazilian Jiu Jitsu History.

In 1925, Carlos and his brothers opened their first jiu-jitsu academy, and Gracie Jiu-Jitsu was born in Brazil. 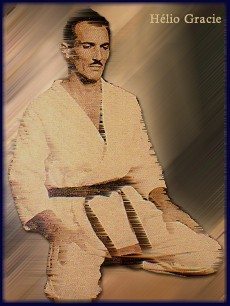 At this point, the base of techniques in BJJ was similar to those in Kano’s Judo academy in Japan. As the years progressed, however, the brothers (notably Carlos and Helio) and their students refined their art via brutal no-rules fights, both in public challenges and on the street. Particularly notable was their willingness to fight outside of weight categories, permitting a skilled small fighter to attempt to defeat a much larger opponent.

They began to concentrate more and more on submission ground fighting, especially utilizing the guard position. This allowed a weaker man to defend against a stronger one, bide his time, and eventually emerge victorious.

In the 1970’s, the undisputed jiu-jitsu champion in Brazil was Rolls Gracie. He had taken the techniques of jiu-jitsu to a new level. Although he was not a large man, his ability to apply leverage using all of his limbs was unprecedented. At this time the techniques of the open guard and its variants (spider guard, butterfly guard) became a part of BJJ. Rolls also developed the first point system for jiu-jitsu only competition. The competitions required wearing a gi, awarded points (but not total victories) for throws and takedowns, and awarded other points for achieving different ground positions (such as passing an opponent’s guard). After Rolls’ death in a hang-gliding accident, Rickson Gracie became the undisputed (and undefeated!) champion, a legend throughout Brazil and much of the world. He has become part of Brazilian Jiu-Jitsu history, since the early 1980’s, in both jiu-jitsu competition and no-rules MMA competition.

Jiu-jitsu techniques have continued to evolve as the art is constantly tested in both arenas. For example, in the 1990’s Roberto “Gordo” Correa, a BJJ black belt, injured one of his knees, and to protect his leg he spent a lot of practice time in the half-guard position. When he returned to high-level jiu-jitsu competition, he had the best half-guard technique in the world. A position that had been thought of as a temporary stopping point, or perhaps a defensive-only position, suddenly acquired a new complexity that rapidly spread throughout the art.

In the early 1990’s, Rorion Gracie moved from Brazil to Los Angeles. He wished to show the world how well the Gracie art of jiu-jitsu worked. In Brazil, no-rules Mixed Martial Art (MMA) contests (known as “vale tudo”) had been popular since Carlos Gracie first opened his academy in 1925, but in the world at large most martial arts competition was internal to a single style, using the specialised rules of that style’s practice.

Rorion and Art Davie conceived of the Ultimate Fighting Championship. This was a series of pay-per-view television events in the United States that began in 1993. They pitted experts of different martial arts styles against each other in an environment with very few rules, in an attempt to see what techniques “really worked” when put under pressure. Rorion also entered his brother Royce Gracie, an expert in Brazilian Jiu-Jitsu, as one of the contestants.

Royce dominated the first years of the UFC against all comers, amassing eleven victories with no fighting losses. At one event he defeated four different fighters in one night. This, from a fighter that was smaller than most of the others (at 170 lbs, in an event with no weight classes), looked thin and scrawny, and used techniques that most observers, even experienced martial artists, didn’t understand.

In hindsight, much of Royce’s success was due to the fact that he understood very well (and had trained to defend against) the techniques that his opponents would use, whereas they often had no idea what he was doing to them. In addition, the ground fighting strategy and techniques of BJJ are among the most sophisticated in the world. Besides the immediate impact of an explosion of interest in BJJ across the world (particularly in the US and Japan), the lasting impact of Royce’s early UFC dominance is that almost every successful MMA fighter now includes BJJ as a significant portion of their training. 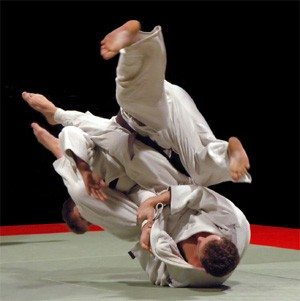 Brazilian Jiu-Jitsu is primarily a ground-fighting art. Most techniques involve both fighters on the mat. There is a heavy emphasis on positional strategy, which is about which fighter is on top, and where each person’s legs are. Positions are stable situations, from which a large variety of techniques are available to both fighters.

Specific techniques taught are designed either to improve one’s position (for example, to “pass the guard”, by going from being “in the guard” to getting around the opponent’s legs, resulting in side control); or else as a finishing submissions. Most submissions are either chokes (cutting off the blood supply to the brain) or arm locks (hyperextending the elbow, or twisting the shoulder).

Belt ranks start at white belt, and progress through blue, purple, brown, and then black. It generally takes about 2-3 years of training multiple times per week to be promoted to the next belt rank. However, there is no formal rank test. Instead, rank is about the ability to apply jiu-jitsu techniques in a competitive match. A student generally needs to be able to reliably defeat most other students at a given rank in order to be promoted to the next rank.

Given the jiu-jitsu roots, and the interest in competition, occasionally related techniques are taught. In each case, other specific martial arts focus on these sets of techniques more than BJJ, and they generally just receive passing mention and rare practice in BJJ training. For example, takedowns tend to be similar to Judo and western wrestling; leg locks (such as in Sambo) are not encouraged but sometimes allowed. Some schools teach street self-defense or weapon defense as well; this instruction tends to be much more like old-style Japanese jiu-jitsu with partner practice, and rarely impacts the day-to-day grappling training. Also, many dedicated BJJ students are also interested in MMA competition, and attempt to practice their techniques without a gi, and sometimes with adding striking from boxing or Muay Thai.

Most training has students wearing a heavy (“jiu-jitsu” or “Judo”) gi/kimono, on a floor with padded mats. A typical class involves 30 minutes of warm ups and conditioning, 30 minutes of technique practice with a willing partner, and 30 minutes of free sparring training, against an opponent of equal skill who attempts to submit you.

Most of the training is done with all students on the mat. For example, training usually beings with both students facing each other from a kneeling position.

Competition is also encouraged. For a jiu-jitsu tournament, competitors are divided by age, belt rank, and weight class. Time limits are generally five to ten minutes, depending on belt rank. Matches start with both competitiors standing, on a floor with a padded mat. A tap out from submission ends the match. If time runs out without a submission, points determine the winner:
• 2 points: Takedown from standing; Knee-on-stomach position; or Scissor, sweep, or flip, using legs (from bottom position to top)
• 3 points: Passing the guard
• 4 points: Mount; or Mount on back (with leg hooks in)

Many BJJ students are also interested in open submission grappling tournaments (different points rules, usually no gi), or Mixed Martial Arts (MMA). Most BJJ instructors encourage such competition, and often assist in the training. However, typically BJJ classes wear a gi, start from the knees, and prohibit strikes.