This article explains Sumo History and Development of this Wrestling Martial Art from Japan. Sumo is perhaps the best known of Japan’s competitive sports. All you have to do is push your opponent out of the ring or get him to touch the ground with any part of his body except the feet. Sounds easy but, if you have ever seen a sumo wrestler, you would have some idea of the problem. Most of them are anywhere up to 200 kilos! But the biggest is not always the best.

While sumo doesn’t look very complex to the uninitiated, there are over 70 moves that wrestlers use and the training to become a competitor is very rigorous. Before the match begins, the wrestlers who are participating form a procession around the ring wearing a heavily embroidered apron with their symbols on it. Once they have all come out and the match has been blessed and opened, they return to prepare for their match. 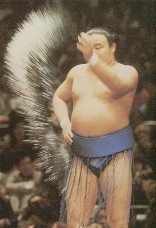 Two wrestlers come to the main ring. They wear cloth loincloths, traditionally white for purity but other colours can also be seen. Many rituals and superstitions exist in sumo and can be observed at the matches. Wrestlers cleanse themselves by sipping water and throw salt into the ring for purification. Women are not allowed to enter the ring. If one does, it must be cleansed and repurified before another match can take place.

Each match begins with much stomping, throwing of salt and staring, all intended to intimidate the opponent. When the match begins, agility and flexibility are important. Wrestlers lock hands and arms and try to tip each other over or push their opponent out of the thick rope border that signifies the fighting area. The referee, a priest, calls the moves and nominates the winner when the match has finished. Surprisingly, matches rarely last more than a minute!

The History of Sumo

Sumo goes back over 2000 years. Originally it was a celebration at shrines for the rice harvests. It is said that the stomping, which is still used today, was originally an effort to summon the gods to bless the harvest. The first championship or ‘basho’ was run in 730 AD but the sport did not achieve professional status until the 17th century. Early wrestlers only ate meat from fowl because 4-legged beasts were believed to be bad luck since that posture (hands and knees) is a losing one in sumo. Modern wrestlers eat lots of just about everything!

Training to become a sumo wrestler begins at age 15 after the applicants pass a health check which has a minimum height and weight requirement of 173cm and 75 kgs. Trials are held 6 times a year with over 100 applicants applying at each trial. Wrestlers usually retire around age 30. The training program is especially designed to develop a body which is bottom heavy and therefore difficult to push over!

Every year 6 tournaments are held in Japan, and some other countries such as Hawaii also have wrestlers who participate. The top sumo wrestler is known as ‘yokuzuna’. Each tournament lasts 15 days and is televised as seats invariably sell out well in advance. Watching a Sumo bout can be like stepping back hundreds of years into the past and is an experience that shouldn’t be missed.