In our modern society, however, Nihon Ju Jitsu has also become a Budo, integrating personality development as part of our goal, a deep respect for human life and a principle of proportionality of the defense toward the attack.

Nihon Ju Jitsu is a pure art of self defense: a research of the highest effectiveness with minimum efforts in any situation. Tai-Jitsu is used by many police forces in Japan, France, Hungary, Spain, Portugal, North Africa… etc.

NTJ is a very structured system; It has specific fundamentals techniques (Kihon), 24 basic techniques, 3 Atemi Kata, 5 fundamental Kata, several types of Randori, Shiai and Bunkai. Each level of study is organized with a specific program and a progressive approach.

NTJ has a large number of techniques; However the system is kept open in order to let each Budoka to choose the techniques that best fit their personal body type, age or personal preferences.

Emphasis is put on fundamentals and key points rather than a rigid form. For this reason, many martial artists from other style decide to study Nihon Tai-Jitsu to add more efficiency or to complete their own style. Each person will adapt NTJ to him/herself rather than following a pre-defined corporal expression. Efficiency, concepts and minimum efforts for maximum effects are the guidelines. 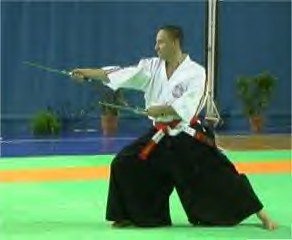 Tai-Jitsu is one of Japanese oldest style (Ryu) of Ju-Jitsu whose origins date from 11th century to 16th century. Other names were also used such as Jujutsu, Koshi no Makari, Yawara…

The actual techniques of Nihon Tai-Jitsu were strongly influence by the ancient Daito Ryu from Takeda Clan conserving their original effectiveness.

During the first part of 20th century, the style was enriched with numerous technical components of Mochizuki Shihan’s Yoseikan Dojo. The prestigious Master Minoru Mochizuki brought it for the first time to Europe in 1951, beginning its expansion outside of Japan, by means of his disciple, the French Jim Alcheik.

After WW2, as Japan was loosing interest in its traditional martial arts, it is in Europe that the Nihon Tai-Jitsu became an even more complete Martial Art (Budo) under the influence of Jim Alcheik and his student Roland Hernaez.