The Kyudo History of Japanese archery has been shrouded in myth and legend, making it difficult to assemble a completely accurate account of its development. Still, by focusing on the similarities recorded in ancient chronicles, historians have managed to piece together a reliable picture of the historical development of kyudo. For clarity we have divided that development into five historical stages – Prehistoric (7,000 B.C to A.D. 330), Ancient (330-1192), Feudal (1192-1603), Transitional (1603-1912), and Modern (1912 to the present). 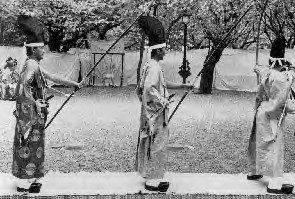 It goes without saying that the evolution of Japanese archery closely coincides with the development and use of the Japanese bow. The earliest known inhabitants of the Japanese islands, a hunter-gatherer culture known as the Jomon relied heavily on the use of the bow. Their bows were of different lengths but most were the short, center-gripped type common to other primitive cultures. The Jomon bow was primarily used as a hunting tool but it is quite probable that it was also used in tribal warfare and ritual. From around 250 B.C to A.D. 330 the Yayoi culture flourished. During this time the bow came to be used as a symbol of political power. Legend says that Japan’s first ruler was Emperor Jimmu, (illustration at right) who ascended to the thone in 660 B.C. And while many historians dispute this, the fact remains that in paintings and descriptions of his life Jimmu is always depicted holding a long bow, a symbol of his authority. A bronze casting from the Yayoi period appears to show the use of a long asymmetrical bow. And a written account compiled by the Chinese in the third century describes the Japanese as using a bow with upper and lower limbs of differing length, so it is highly likely that the unique asymmetrical design of the Japanese bow was adopted during the Yayoi period.

During this period Japan was strongly influenced by Chinese culture. It was then that ceremonial archery became an important part of the court system. The Japanese bowmakers also began to borrow the composite construction used by the Chinese and by the tenth century had developed a two-piece composite bow using bamboo and wood. The Ancient period also saw the rise of the samurai, or warrior class, and the bow saw even greater use as a weapon of war as the samurai struggled to establish themselves as a powerful new social class. 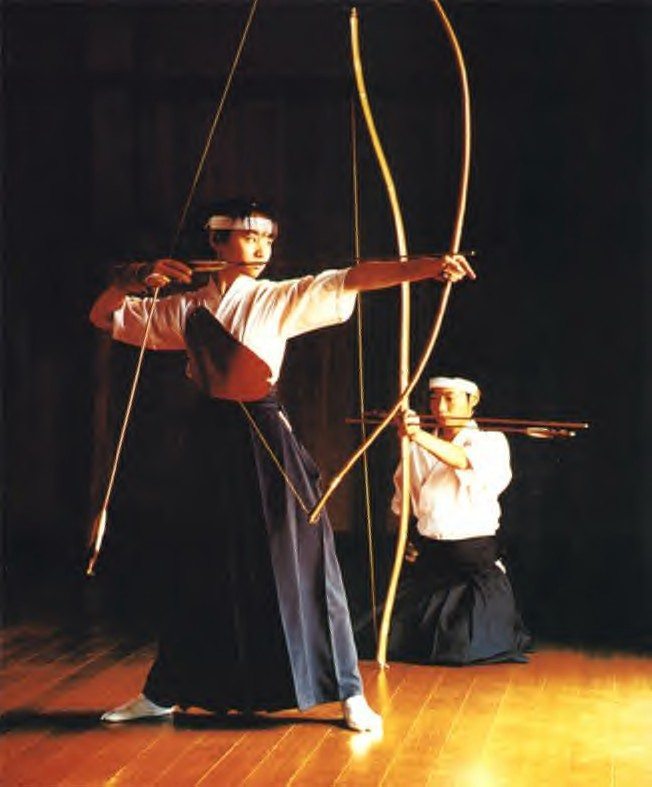 In 1192 Minamoto no Yoritomo was granted the title of shogun, or military governor, and established stricter standards for his warriors. As part of that training, Ogasawara Nagakiyo, the founder of Ogasawara Ryu, was instructed to teach mounted archery in a more formal manner. It was during this time that the kyujutsu ryu, the schools of archery technique came into their own. One of the most influential archers of the time was Heki Danjo Masatsugu, the founder of Heki Ryu, who lived from 1443 to 1502. He is credited with standardizing the training of kyujutsu which no doubt assured its continued growth and development, even into modern times. It was during the Feudal period that the construction of the Japanese bow reached its peak. By the late sixteenth century it was regarded as being near perfect in design. So much so, that the bamboo and wood laminate bows used in modern kyudo are nearly identical to those made four hundred years ago. As it turned out, the end of the sixteenth century also spelled the end of the bow’s usefulness as a weapon of war when Oda Nobunaga, commanding conscripts armed with muskets, defeated the opposing force of kyujutsu archers in a major battle in 1575. 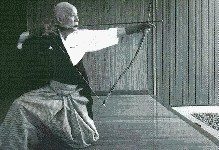 In the seventeenth century Japan’s period of civil war ceased and the emphasis of Japanese archery gradually changed from kyujutsu to kyudo, or, in other words, from the technique of fighting with a bow to the way of personal development. The Transitional period also saw the general public become more involved with the practice of archery. As the twentieth century dawned, Honda Toshizane, a kyudo instructor at Tokyo Imperial University, combined elements of the warrior and ceremonial styles to create a hybrid form that came to be known as Honda Ryu. Although the traditional schools were against the creation of this hybrid form, Honda Toshizane is widely credited today with ensuring the survival of kyudo in the twentieth century.

In the early 1930’s it became evident that modern kyudo would need to be standardized in some way to guarantee its continued growth. The issue was hotly debated and the agreement that was reached in 1934 was tentative at best. After World War II, the practice of kyudo, along with all other martial arts, was banned by the occupation forces. It wasn’t until 1949 that final authorization was granted and the Zen Nihon Kyudo Renmei (known as the All Nippon Kyudo Federation in English) was formed. In 1953 the kyudo kyohon (manual) was published, establishing the shooting procedures that are in common use today.