Professor Henry Seishiro Okazaki, founder and Master of the Kodenkan Ju jItsu and the American Jujitsu Institute of Hawaii, was born in the town of Kakeda, Fukushima Prefecture, on the island of Honshu, Japan, January 28, 1890. At the age of 16 he moved with his family to the island of Hawaii, and when he was 19 he was diagnosed as having tuberculosis.

In the early 1900’s tuberculosis was called “consumption” and “black lung disease”, and Okazaki was convinced he was going to die. Okazaki writes that “Because of this, I committed ‘sutemi’, self-abandonment to death.” Fortunately, he came under the care and guidance of a great Jujitsu master and healer by the name of Kichimatsu Tanaka at his Shin Yu Kai Dojo in Hilo. Okazaki goes on to say: “Assuming I was a dead man, I practiced Judo with all my strength at the risk of my life. During this time, strangely enough, I had a complete recovery of health from the sickness, and I became the owner of a body as if made of iron! Therefore, I was convinced that my whole life was a gift from Judo and thereafter my whole life should be devoted in behalf of Judo.”

In addition to his constant study of Jujitsu under Professor Tanaka, Okazaki also studied under various masters in Hilo, Hawaii, and mastered the Jujitsu styles of Yoshin Ryu, Iwaga Ryu, and Kosogabe Ryu. Furthermore, he learned the Okinawan form of the Chinese hand techniques known as Ryukyu Karate Jutsu, as well as Philippino knife arts, Spanish dirk fighting, Mushi Jutsu (the Chinese Praying Mantis Style of Kung Fu), and Hawaiian Lua (the “touch of death” techniques practiced by the ancient Hawaiian warriors. He also studied American boxing and wrestling in order to understand how his Oriental arts compared and contrasted with the American styles of pugilism. In 1922, after 13 years of exhaustive study of martial arts, Tanaka Sensei finally promoted Okazaki to Black Belt.

In 1924, with a letter of introduction from his Sensei, Okazaki toured Japan, where he deeply studied and researched the ‘okugi’ (the very secret techniques), at more than fifty Jujitsu and Judo schools including Shibukawa Ryu, Yoshin Ryu, Namba Shoshin Ryu, Take No Uchi Ryu, and many others, as well as Kodokan Judo. At the Kodokan he studied Judo under Dr.Jigoro Kano, and was promptly promoted to 3rd Degree Black Belt. During his tour he states that he acquired 675 different kinds of techniques and forms. He also made a special study of kappo and seifukujitsu (restorative body therapy), resusitation, bone setting, and herbology, because he recognized that the virtue of jujitsu lay in the possibility of reversing the effects of deadly or disabling arts by restorative massage and therapeutics.

Upon his return from Japan, Henry Okazaki taught Judo and Jujitsu on the Hawaiian island of Maui. Gradually, he evolved a system of self-defense Jujitsu comprising courses for men, women, and children, including methods of defense against punching, kicking, and grabbing attacks, as well as defenses against the knife, gun, rifle, sword, and bayonet. In his system, which he called Danzan Ryu, “Sandalwood Mountain Style”, he stressed the ancient principles of philosophical and moral training while retaining the best of the arts of self-defense, and restoration therapy, and combined these with the system of physical culture and mental cultivation now known as sports Judo. He thus achieved a true synthesis of ancient and modern elements which is a complete system of Judo and Jujitsu.

Professor Okazaki decided to call his style Danzan Ryu for two reasons. The first was to keep alive the memory of one of his teachers, Wo Chung, who taught him Mushi Jutsu, because he used to call the Hawaiian Islands “Danzan”, which means “sandalwood mountain”. Sandalwood is a sweet smelling cedar tree that the Chinese exported from Hawaii during the 1800’s which they used to build their Buddhist temples. In view of this, the Chinese named Hawaii ‘Danzan’ – Sandalwood Mountain. The other reason is because most of Okazaki’s studies took place in Hawaii.

In 1929 Okazaki moved his family to Honolulu, on the island of Oahu, and established the Okazaki Seifukujitsu Institute (also known as the Nikko Sanitarium of Restoration Massage), where he subsequently earned an international reputation for his skill as a physical therapist. His fame brought him patients from all parts of the world for relief from so-called “incurable” nerve and muscular disorders. Among his more famous patients were President Franklin Roosevelt, Olympian Johnny Weismuller, actor Charlie Chaplin, and entertainer George Burns.

Also in 1929, Professor Okazaki established his Jujitsu school, which he called Kodenkan Ju Jitsu, “The School of the Ancient Tradition,” which later became known as the American Jujitsu Institute of Hawaii. His life from that time forward was devoted to instructing worthy Americans, without regard to race, color, national origin, or sex, in the arts and science of Judo, Jujitsu, and Restorative Body Therapy, and to the development of disciples who would introduce his system throughout the world. It is safe to say that when Professor Okazaki died in July, 1951, thousands of students had studied in his school. His system, Kodenkan Danzan Ryu, remains today the most widely taught, and widely imitated, system of self-defense Jujitsu in the United States.

“Since the fundamental principle acquired through the practice of Jujitsu has been elevated to a fine moral concept called Judo, ‘The Way of Gentleness,’ it may well be said that the primary objective of practicing Judo is perfection of character. And to perfect one’s character, one must be grateful for the abundant blessings of Heaven, Earth, and Nature, as well as for the great love of parents; one must realize his enormous debt to teachers and be ever mindful of his obligations to the general public.

As a member of a family, one’s first duty is to be filial to parents, to be helpful and harmonious with one’s wife or husband, and to be affectionate to brothers and sisters, so that the family may be a sound successful and harmonious unit of the community.

As a member of a nation one must be grateful for the protection which one derives as a citizen; one must guard against self-interest and foster a spirit of social service. One must be discreet in action, yet hold courage in high regard, and strive to cultivate manliness. One must be gentle, modest, polite, and resourceful, never eccentric, but striving always to practice moderation in all things. One must realize that these qualities constitute the secret of the practice of Judo.

Anyone who practices Judo should have no fear of facing stronger opponents, nor should he scorn weaker ones. With the skill which he develops, he does not oppose the strength of his opponent. For example, if a boat is floating on water, then a single man’s strength is sufficient to maneuver it freely because the boat floats on top of the water. If the boat is on dry land, then even several men cannot move it. When a weak person faces a strong one, he should understand this principle. 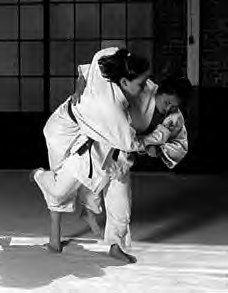 Having developed skill in the forms and techniques, which constitute the basic art of Judo, one should never use these arts against anyone without sufficient justification. Therefore, refrain from arrogance and do not despise a small or weak opponent.

Every student of Judo should realize that sincerity is the foundation of all virtues, that kindness is the secret of success in one’s work, and that amiability is essential to success. Working pleasantly is the mother of health. Strenuous effort and diligence will overcome adverse circumstances. Simplicity, fortitude, and vigor are the keys to happiness; and service to humanity is the foundation of mutual existence and common prosperity.

As aptly expressed in the poem ‘The boughs that bear hang lowest,’ one should never forget the virtue of modesty as one attains proficiency in the art of Judo. Do not disdain or regard lightly either literary or military art; each is important and deserves equal cultivation and respect. Within constant motion and change there is tranquility; and within tranquility, there is motion and change. There is a stillness in the midst of movement, and movement in the midst of stillness.

One must not forget parental love and one’s enormous indebtedness to teachers, nor fail to value those who come after us. Be grateful for the protection of heaven and Earth. Be a good leader to younger students, to lead younger students well will in the long run mean to attain proficiency in the skill of Judo.

Like a drawing in India ink of the whispering of wind in the pines, the secrets of Judo can only be suggested. Only through personal experience can one comprehend the mystic ecstasy of such secrets. It is said of Jujitsu that it would require ten years of practice to win victory over one’s self and twenty years to win victory over others.

Whatever the trials or dangers, even ‘Hell under the upraised sword,’ remain calm and remember the doctrine imparted to you by your teacher.

A noted verse reads: ‘For the lotus flower to fall is to rise to the surface.’

Only by cultivating a receptive state of mind, without preconceived ideas or thoughts, can one master the secret art of reacting spontaneously and naturally without hesitation and without purposeless resistance. Emptying the self, one enters into the realm of dispassion and openheartedness, and for the first time is able to comprehend the secret art of benefiting both oneself and others in perfect harmony.

These then are the keys to the esoteric secrets of Kodenkan Ju Jitsu into which I have had the honor to initiate you.”

H. Seishiro Okazaki
Judo Master
Director of Kodenkan
*This text is a translation of the hortative portions of a torah-no-maki or scroll diploma awarded to graduates of the Kodenkan American Judo Institute of Hawaii by professor Henry S. Okazaki.