Daito Ryu Ju Jitsu history started with the Daito-ryu scrolls issued by Takeda Sokaku (beginning just before the turn of the century) include a lineage that traces the art back to the Emperor Seiwa, who, legend has it, won his throne when his sumo champion defeated his elder brother’s champion. The actual founder of the art is said to have been Seiwa’s descendant Shinra Saburo Minamoto no Yoshimitsu [1045-1127], who lived in a mansion known as Daito, hence the name Daito-ryu. The art was then handed down through his descendants, the Takeda family of Kai Province (modern-day Yamanashi Prefecture), until that family’s destruction five years after the fall of the its most famous member, general Takeda Shingen, in 1573. A distant relative of Shingen’s, Kunitsugu, made his way to Aizu in 1644, where he was taken on as a karo (senior councilor) under the Aizu lord Hoshina Masayuki [1611-1673], son of the second Tokugawa shogun, Hidetada. Daito-ryu tradition asserts that Kunitsugu taught his family’s secret techniques to his lord Masayuki, who combined them with the principles of court etiquette that he had learned as oshikiuchi, into a system of self-defense for use within the palace. This amalgamation, together with the Itto-ryu Hoshina later studied, became the basis for the martial arts training of the succeeding lords of the Aizu clan, as well as for its highest ranking members.

The original Takeda family art continued to be passed down in secret within the family itself, eventually to Sokaku’s grandfather, Soemon, where the earliest written lineages in Sokaku’s mokuroku end. Presumably, however, Soemon then taught Sokichi, who in turn taught his own son, Sokaku.

Arts such as sumo, judo, karate, and wrestling, are often called “fighting arts.” While it is not our purpose here to argue whether or not this term is appropriate for these budo and sports, we can state definitively that Daito Ryu Ju Jitsu is not at all a “fighting art” in the sense that these others might be considered to be. A look at the history of Daito-ryu shows clearly that it was developed in large part as a means of self-defense, particularly one to be used by warriors while inside the palace. This may be seen in the inclusion and emphasis on oshikiiuchi. In short, Daito-ryu was developed as a way to effectively and efficiently neutralize violence, not cause it. This is in perfect agreement with the Chinese character for the “bu” in budo, one interpretation of which is “to stop halberds.” This is why that although we have forms used to demonstrate aikijutsu, there are no competitive matches. 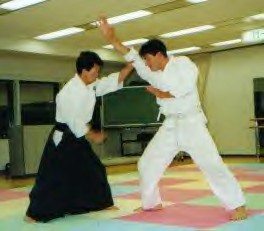 One distinctive feature of Daito-ryu is that it has incorporated many of the essential elements and principles of other schools of budo, most notably the Ono-ha Itto-ryu. This was done to better allow the student to capture the essence of budo and to transform the art into a comprehensive one. 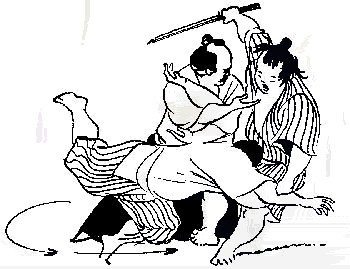 Daito-ryu goes beyond being a simple means of self-defense, and aims at putting mind and body in balance with the spirit that pervades the universe, developing oneself as a person, and contributing to society. One might recall that while Shinra Saburo Yoshimitsu, the distant founder of Daito-ryu, was skilled in martial techniques and the arts of war, he was also a skillful player of the sho. One story tells that while accompanying the shirabyoshi dancers on this instrument, he came to understand that despite the dancers’ elegant, fluid and ever-changing movement, they admitted no openings (suki). From this he perceived the principle of non-form (mukei) and mastered the deepest essence of aiki. It is in this anecdote, perhaps, that we find a hint of the true essence of Daito-ryu.