Learn a brief Bushido History in this article. Bushido, literally translated “Way of the Warrior,” developed in Japan between the Heian and Tokugawa Ages (9th-12th century). It was a code and way of life for Samurai, a class of warriors similar to the medieval knights of Europe. It was influenced by Zen and Confucianism, two different schools of thought of those periods. Bushido is not unlike the chivalry and codes of the European knights. “It puts emphasis on loyalty, self sacrifice, justice, sense of shame, refined manners, purity, modesty, frugality, martial spirit, honor and affection” (Nippon Steel Human Resources Development Co., Ltd. 329).

Bushido comes out of Buddhism, Zen, Confucianism, and Shintoism. The combination of these schools of thought and religions has formed the code of warrior values known as Bushido.

From Buddhism, the Bushido history gets its relationship to danger and death. The samurai do not fear death because they believe as Buddhism teaches, after death one will be reincarnated and may live another life here on earth. The samurai are warriors from the time they become samurai until their death; they have no fear of danger. Through Zen, a school of Buddhism one can reach the ultimate “Absolute.” Zen meditation teaches one to focus and reach a level of thought words cannot describe. Zen teaches one to “know thyself” and do not to limit yourself. Samurai used this as a tool to drive out fear, unsteadiness and ultimately mistakes. These things could get him killed.

Shintoism, another Japanese doctrine, gives Bushido its loyalty and patriotism. Shintoism includes ancestor-worship which makes the Imperial family the fountain-head of the whole nation. It awards the emperor a god-like reverence. He is the embodiment of Heaven on earth. With such loyalty, the samurai pledge themselves to the emperor and their daimyo or feudal landlords, higher ranking samurai. Shintoism also provides the backbone for patriotism to their country, Japan. They believe the land is not merely there for their needs, “it is the sacred abode to the gods, the spirits of their forefathers . . .” (Nitobe, 14). The land is cared for, protected and nurtured through an intense patriotism.

Confucianism gives Bushido its beliefs in relationships with the human world, their environment and family. Confucianism’s stress on the five moral relations between master and servant, father and son, husband and wife, older and younger brother, and friend and friend, are what the samurai follow. However, the samurai disagreed strongly with many of the writings of Confucius. They believed that man should not sit and read books all day, nor shall he write poems all day, for an intellectual specialist was considered to be a machine. Instead, Bushido believes man and the universe were made to be alike in both the spirit and ethics. 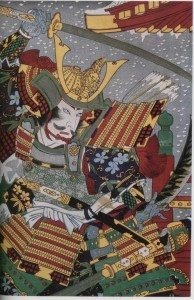 Along with these virtues, Bushido also holds justice, benevolence, love, sincerity, honesty, and self-control in utmost respect. Justice is one of the main factors in the code of the samurai. Crooked ways and unjust actions are thought to be lowly and inhumane. Love and benevolence were supreme virtues and princely acts. Samurai followed a specific etiquette in every day life as well as in war. Sincerity and honesty were as valued as their lives. Bushi no ichi-gon, or “the word of a samurai,” transcends a pact of complete faithfulness and trust. With such pacts there was no need for a written pledge; it was thought beneath one’s dignity. The samurai also needed self-control and stoicism to be fully honored. He showed no sign of pain or joy. He endured all within–no groans, no crying. He held a calmness of behavior and composure of the mind neither of which should be bothered by passion of any kind. He was a true and complete warrior.

These factors which make up Bushido were few and simple. Though simple, Bushido history created a way of life that was to nourish a nation through its most troubling times, through civil wars, despair and uncertainty. “The wholesome unsophisticated nature of our warrior ancestors derived ample food for their spirit from a sheaf of commonplace and fragmentary teachings, gleaned as it were on the highways and byways of ancient thought, and, stimulated by the demands of the age formed from these gleanings a new and unique way of life” (Nitobe, 20).