Budoshin Ju-Jitsu is the gentle art of self-defense. It incorporates Judo [throws, pins & matwork], Aikido [leverage, momentum, pressure points & joint locks] and Karate [hits & kicks] into an extremely effective self-defense system. Budoshin Ju-Jitsu will allow you to have absolute control over your attacker[s] in a wide variety of situations. All techniques are taught for self-defense situations with one or more attackers; there are no katas or forms practice in which you are dealing with an imaginary enemy. Budoshin Ju-Jitsu also teaches the art of Ju-Jitsu. As you progress you learn the intricacies of the art and why techniques work as they do. Not only will you acquire technical expertise but you will also develop a sound theoretical and philosophical background in the art.

The history of the martial art of Ju-Jitsu (Gentle Art) can be traced back over 2,500 years. Ju-Jitsu developed from many individual teachings that either started in Japan or found their way to Japan from other oriental countries. Going far back into Japanese mythology it is possible to trace Ju-Jitsu to the ancient Japanese gods, Kajima, and Kadori, who supposedly used Ju-Jitsu to punish the lawless inhabitants of an eastern province of Japan. 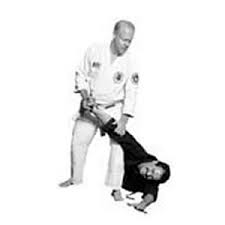 The first dated mention of Jujitsu was during the period of 772-481 B.C., when open-hand techniques were used during the Choon Chu era in China. In 230 B.C. the wrestling sport of Chikura Kurabe developed in Japan and was integrated in JuJitsu training. A number of Jujitsu schools started from 230 B.C. on. During the time period around the B.C.-A.D. change in dating, it is also noted that wrestling and related techniques served as the origin of Ju-Jitsu. There is also evidence that empty-hand techniques were used during the Heian period (ca. 784 A.D.) in Japan, but included with weapon training as part of the samurai warrior’s training. In 880 A.D. Prince Teijun founded the Daito Ryu Aiki Ju-Jitsu Dojo.

Most of the actual credit for founding the formal art of JuJitsu goes to Tenenuchi (or Takenouche) Hisamori, who founded the school of Jujitsu in Japan in 1532. In 1559, Chin Gen Pinh (a monk) migrated to Japan, from china, bringing Kempo (China Hand) with him. Parts of Kempo were integrated into Ju-Jitsu . Hideyoshi Toyotomi, also Chinese, migrated to Japan shortly thereafter. He brought Ch-an Fa and Korean T’ang Su (punching and nerve striking skills) to Japan, both of which became part of Ju-Jitsu. During the Tokugawa era, (ca. 1650 and on), Ju-Jitsu continued to flourish as part of the samurai warrior’s training.

With the passing of the Tokugawa era, (ca. 1800), Japan became somewhat united and there were many changes in Japanese society. One of the results was the reduction of the samurai warrior to the status of the common citizen. In his new position the samurai could no longer carry a sword. He was forced to rely solely on empty-hand techniques as a means of defending himself.

The next mention of Ju-Jitsu is in 1882, when Dr. Jigaro Kano developed the sport of Judo (Gentle-Way) from Ju-Jitsu. He did this to increase the popularity of the martial arts and to provide a safe sport using selected techniques taken from the effective self-defense system of Ju-Jitsu.

Although Jack Seki’s father, Sanzo Seki [1888 – d:?], was a Ju-Jitsu master himself, he sent Jack to study directly under the legendary Dr. Jigaro Kano, an expert in Kitoryo [a.k.a. Kito Ryu] and Tenshishinyo [a.k.a. Tenjin-Shinyo Ryu] Jiu-Jitsu. After studying under Kano, Seki returned to master the art as taught by his father. Prior to World War II, Seki was given the option of being drafted into the Japanese army or emigrating to the United States. Fortunately he chose the latter and returned to the U.S. in the mid-1930’s. With his martial arts training current information says that he worked for the U.S. Army Air Force as a weaponless defense instructor. It is also possible that he may have served as a translator in the Pacific theatre during the war.

The history of Budoshin Ju-Jitsu itself is rather unique and recent. When Profs. William Fromm & I took over the Burbank YMCA Jujitsu program for our instructor, Prof. Sanzo “Jack” Seki, in 1967 it was a relatively small program. Within a couple of years we had an extremely large and solid program which took up an entire gymnasium. By this time other martial artists wanted to know what “style” of Ju-Jitsu we taught. Prof. Seki’s attitude was that there was only Ju-Jitsu and that ultimately there weren’t any styles — just variations on the theme. With that thought in mind we came up with the name Budoshin, which means to conduct oneself in an honorable and respectable manner. The concept of “Budoshin” is covered in much greater detail in the Black Belt Handbook and my two Ohara books. This was acceptable to Prof. Seki as “Budoshin” was seen as an appropriate attitude and not a “style”. In the mid 1970’s I had the opportunity to also study under Prof. Harold Brosious who taught Ketsugo Ju-Jitsu. Although Prof. Brosious had a radically different approach to teaching the art, many of his techniques supplemented enriched what I had learned from Prof. Seki. Both Prof. Seki’s and Prof. Brosious’s teachings have been effectively incorporated into Budoshin Ju-Jitsu.

There are different paths up the mountain. Many times they cross and parallel each other. But the ultimate goal is the same. Both Profs. Seki and Brosious taught every technique from a street situation. Ju-Jitsu was taught for self-defense. As students progressed and their technique improved both Professors helped the students make Ju-Jitsu an art; to understand the theory and mechanics behind every move, how the human body acted and reacted, and incorporate that understanding into an extremely effective personalized self-defense system. Budoshin Ju-Jitsu will teach you the art of Ju-Jitsu as well as how to effectively defend yourself in any situation.