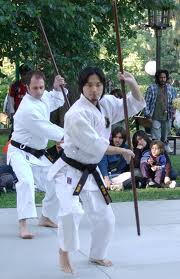 The Japanese martial art of wielding the bo is bojutsu. The basis of bojutsu history is te, or hand, techniques derived from Quanfa and other martial arts that reached Okinawa via trade and Chinese monks. Thrusting, swinging, and striking bouts techniques often resemble empty-hand movements, following the philosophy that the bo is merely an “extension of one’s limbs”. Consequently, bojutsu is often incorporated into other styles of empty hand fighting, or karate. Bojutsu attacks are often avoided by agile footwork or jumps and returning strikes made at the enemy’s weak points.

The bouts techniques typically grip in thirds, and when held horizontally in front, the right palm is facing away from the body and the left hand is facing the body, enabling the bo to rotate. The power is generated by the back hand pulling the bo, while the front hand is used for guidance. When striking, the wrist is twisted, as if turning the hand over when punching. Bojutsu techniques include a wide variety of blocks, strikes, sweeps, and entrapments. The bo may even be used to sweep sand into an opponent’s eyes.

The earliest form of bojutsu, a staff, has been used throughout Asia since the beginning of recorded history. The first bo were called ishibo, and were made of stone. These were hard to make and were often unreliable. These were also extremely heavy. The konsaibo was a very distant variant of the kanabo.They were made wood studded with iron. These were still too cumbersome for actual combat, so they were later replaced by unmodified hardwood staffs. The bo used for self defense by monks or commoners, the staff was an integral part of the Tenshin Shoden Katori Shinto Ryu, one of the martial arts’ oldest surviving styles. The staff evolved into the bo with the foundation of kobudo, a martial art using weapons, which emerged in Okinawa in the early 1600s.

Prior to the 1400s, Okinawa, a small island located south of Japan, was divided into three kingdoms: Chuzan, Hokuzan, and Nanzan. After much political turmoil, Okinawa was united under the Sho Dynasty in 1429. 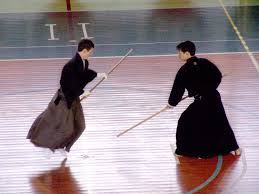 In 1477, Emperor Sho Shin of the second Sho dynasty came into power. Determined to enforce his philosophical and ethical ideas, while banning feudalism, the emperor instituted a ban on weapons. It became a crime to carry or own weapons such as swords, in an attempt to prevent further turmoil and prevent uprising.

Although the bo is now used as a weapon, its use is believed by some to have evolved from non-combative uses. The bo-staff is thought to have been used to balance buckets or baskets. Typically, one would carry baskets of harvested crops or buckets of water or milk or fish, one at each end of the bo, that is balanced across the middle of the back at the shoulder blades. In poorer agrarian economies, the bo remains a traditional farm work implement. In styles such as Yamanni-ryu or Kenshin-ryu, many of the strikes are the same as those used for yari (“spear”) or naginata (“glaive”). There are stick fighting bojutsu techniques native to just about every country on every continent.