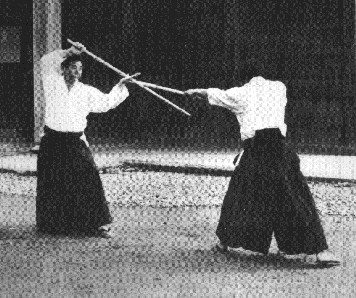 This article talks about the short Aikido history from it’s foundation in the late 19th century. . Aikido is a Japanese martial art that includes techniques for bare-handed wrestling, using weapons, and dealing with the armed enemy. It was promoted throughout Japan by Morihei Ueshiba (1883-1969). Aikido is known for its joint-twisting and pinning techniques (kansetsu-waza) and its thrusting and stunning blows (atemi-waza). The advanced student is a master of techniques to break the opponent’s balance or ward off a thrust or grasp. Aikido techniques have the power to kill or injure, but fundamentally their purpose is to seize and control the opponent. All of the principles of swordsmanship (eye contact, proper distance, timing, and cutting methods) are incorporated into aikido movements. The methods of training and spiritual teachings vary from school to school. Ueshiba learned several different kinds of martial arts during his lifetime, but the major techniques of aikido were derived from the Daito-ryu Jujutsu style, which he learned from Sokaku Takeda (1860-1943) in Shirataki, Hokkaido between 1915 and 1919. Takeda stood only about four feet, nine inches (1.45 meters) all, but he had an extremely strong personality and was an outstandingly gifted jujutsu practitioner. Ueshiba developed his own techniques and named the resulting style “aikido”, since he believed his methods were different from his teacher’s both philosophically and technically. He also needed different nomenclature for his martial art to be economically independent from Takeda. 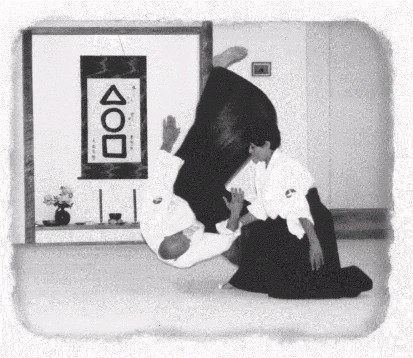 In 1919, Ueshiba moved to Ayabe, Kyoto and started to train as a live-in disciple of Onisaburo Deguchi (1871-1948), a master of a new Shintoism school called Omoto-kyo. There, Ueshiba taught Daito-ryu Jujutsu and engaged in religious services. From that point, Deguchi’s Omoto-kyo doctrines became Ueshiba’s personal spiritual basis. 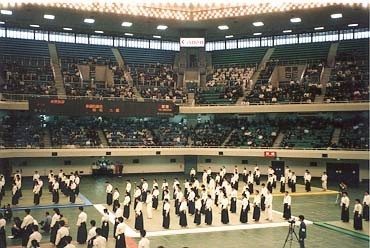 At that time, the popularity of Omoto-kyo was spreading across the country, and some high-ranking Japanese naval officers who went to the school in Ayabe also came to have an interest in Ueshiba’s martial arts, which were still being taught on the sacred grounds of Omoto-kyo in Ayabe. Some of the officers passed on information about Ueshiba’s school to Isamu Takeshita (1869-1949), a retired admiral in Tokyo, the capital. In 1925, Takeshita saw a demonstration of Ueshiba’s Daito-ryu Aiki Jujutsu techniques for the first time and was so impressed that he took up the practice and continued it for the rest of his life. With Takeshita’s tremendous support and Deguchi’s approval, Ueshiba left Ayabe and moved to Tokyo.

In the capital, Takeshita introduced Ueshiba to influential people in military, financial, and political circles, as well as people connected to the imperial household, even organizing a society to support his martial arts teacher. This enabled Ueshiba to become entirely independent from Takeda and Daito-ryu Aiki Jujutsu. During this process, in 1928, Ueshiba changed the name of his martial arts school to Aioi-ryu Aiki Bujutsu. He again renamed his school Aiki-Budo or Ko-Budo, and finally settled with aikido in 1942. Aikido became an official term when it was approved at a conference of the Dai-Nippon Butoku- Kai, the association of all martial arts in Japan.

Like Takeda, Ueshiba had a strong personality and excellent technique and his genius received full attention following Takeda’s death after World War II. He and his gifted disciples are responsible for the current position of aikido as a popular Japanese martial art. And that is the Aikido history in short.