Kapap is the less well known Israeli military martial art system, compared to it’s cousin Krav Maga which has received worldwide popularity. This article gives a brief outline to the Kapap History of this self defence combat system, and it’s place today in modern society.

Towards the end of the Ottoman rule in Palestine, the Jewish settlers had realised they could trust no one to defend and protect them from the threat of the Arab gangs.

They started developing a simple “self defense” system made up of simple elements. They learned combat methods from British soldiers who were still fighting the Turks. The Jewish settlement, supporting the British at that time, was being strengthened in order to undermine Turkish rule. British training included boxing, Judo, wrestling and other fighting systems that the British soldiers had learned during the reign of the British Empire. Trainees added fighting with a walking stick, shepherd stick, knife and bayonet. They called this style of fighting Kapap (Hebrew acronym for Krav Panim el Panim, face-to-face combat). 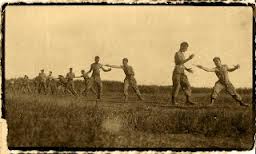 Between the years 1920-1948 Kapap evolved and became the combat doctrine of the different underground movements, mainly the Haganah (the Hebrew word for defense). Kapap developed and became more sophisticated throughout the years. The new immigrants to Palestine brought with them new practices and tactics.

With the establishment of the State of Israel in 1948, Kapap became the combat doctrine for the Israel Defense Forces Israel Police and the various armed forces of Israel at the time. The unique style kept on evolving, adding elements of modern, classic and ancient combat using rifles and guns as well. Kapap became the concept of simple and very effective fighting styles.

Read more about Kapap History, this Israeli Military martial art on some of the website links here: