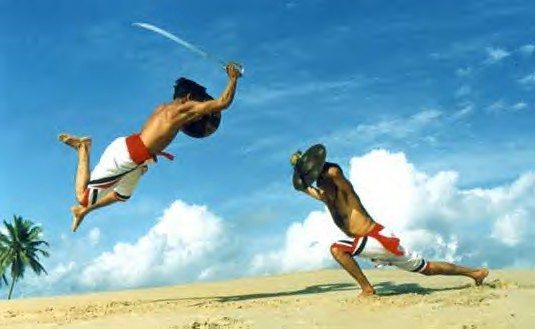 Kalaripayittu is an ancient Indian martial art that uses pressurepoint strikes, yoga stretching and venous strangely shaped weapons. Its name literally means “battlefield training.” Many researchers theorize that it was the basis upon which the Chinese martial arts developed because they contend that Bodhidharma, the Chinese Buddhist monk who taught at Shaolin Temple, would have learned Kalaripayittu in India and transplanted it, along with his religion, to China.

Few Kalaripayittu practitioners teach anywhere in the world even in India. Much of the art is said to have degenerated into a martial dance.

Kalaripayittu has different styles which is generaly classified in to two. “Thekkan” and “Vadakken”. Thekkan Kalaripayittu consists of self-defence art introduced by Maharishi(saint) Agasthyamuni. Vadakken Kalaripayittu is kuzhi Kalaripayittu introduced by Parashurama. Though Vadakken are in different names like dronapalli, odimurisseri, valla batta, Madhya keralam, kadathanadan, Thulunadan, pillathangi, malanadan etc. Out of which Thulunadan Kalaripayittu in vadakken style is better in all respects. It was written in the history and in vadakkan songs, the brave men like Thacholi Othenan, Chandu etc., who have obtained training in kalaripayattu, had gone to Thulunadan kalari and undergone further studies and rectified the defects in the training already obtained.

It is constructed by digging 3 feet below the ground level, an area of length 42 feet (in the East-West direction) and breadth of 21 feet. There are many sacred and important spots in the Kalari based on Vaasthu Shasthra. Out of which Poothara and Gurustanam are most important. 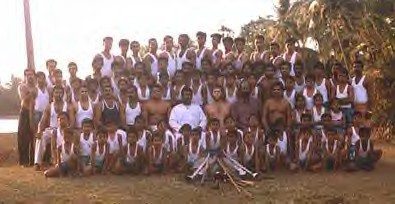 Parashurama is beleived to have brought to this world the art of Kalaripayittu from Paramashiva (the Eternal). Parasurama constructed many Kuzhikalaris in the state of Kerala in South India and taught martial arts to human beings.

The disciple dedicates his mind and body to learning the art from the Guru. The disciple should not deviate from the instructions given by the Guru and should follow him. As the training is in progress 7 good habits will show up in disciple. 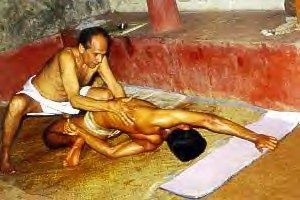 References and sources of this Kalaripayittu article