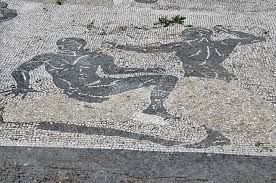 Pankration History tells us that this is the only martial sport in existence today that can legitimately trace its roots to the Ancient Olympic Games from 648 BC to 393 AD . It is also the only modern day martial sport with a recorded history spanning well back to over 3,000 years. The oldest written evidence of Pankration can be found in the 586 th lyric of Orfica in the ancient poem “Argonautica”, which researchers believe dates as far back as the 12th Millennium BC.

The oldest Pankration relic is an ancient horn, found in Agia Triade Crete, depicted with pictures of ancient Pankration athletes, dating back to the 17th Century BC. In the Souidas, the Oldest Dictionary known to man, Pankration is defined as an unarmed combat training art and the Pankratiastis is defined as one who fights with both hands and feet.

The name Pankration is derived from the Greek words, Pan and Kratos , meaning all power or “the one who has power” or “ the one who wins with total power and knowledge.

According to Plutarch, the martial art of Pankration was created by Theseus, the ancient Greek mythical warrior ,who used Pankration techniques to defeat the Minotaur (a beast that was half man and half bull). However according Pausanias, the originator of Pankration is none other than the mythological demi god Hercules. Having won in a Pankration contest in Olympia, after winning on the same day the wrestling competition. He reputedly also won a Pankration competition organized by the Argonauts. The Argonautics of Orfeus has him being awarded a shining and ornamented vase by Jason. Hercules is also said to have won in the first Pythian Games, held by Apollo himself at Delphi. Another tradition has it that Hercules first used Pankration techniques to subdue the Nemeanlion, which is also depicted on numerous surviving Greek vases.

During the early days of the Hellenic Civilization, the Hellenes across the Agean , trained in Pankration, not only as an athletic activity but also as an effective art of warfare. [ Thermonpile, Marathon Etc ]. Pankration formed the basis for all combat training for the ancient Greek soldiers – including the famous Spartan warriors and the soldiers of Alexander’s Macedonian Phalanxes. 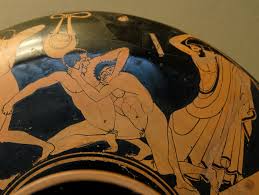 In 648 BC, Pankration was included as separate sporting event for Adult Males in the 33rd Ancient Olympic Games and as a Youth Male event in 200 BC in the Youth Olympic Games. Conducted over a period of three consecutive days and separate from the boxing and wresting events, it soon became extremely popular and continued as an ancient Olympic Sport till 393 AD. Pankration was heralded by the renowned ancient Greek philosopher Philostratos as “the most exciting and worthiest of all sports in ancient Olympia”

The world wide propagation of Pankration is attributed to Alexander the Great, who was credited to have taken Pankration with him across his conquests over Europe and Persia and finally on to India’s Indus valley. Pankration can also be defined as the origin and ancient root of all modern day Mixed Martial Arts (MMA) contests and its ancient techniques can be easily found to be incorporated in most of the unarmed combat techniques of modern day martial arts. 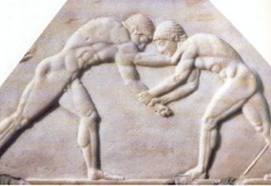 Pankration spread rapidly across the Greek cities, and onto the shores of the Mediterranean, and was referred to by various names. During the Byzantine era (circa 5th – 6th century AD), Pankration contests were called the “Pammachi” in Cyprus and “Olympia” in Antiochia. During the subsequent eras Pankration contests spread also to Western Europe where it was referred to as Clotsata ( circa 12th Century AD ), Lactes (circa 15th Century AD ) and Patso-Clotso in the 19th Century AD.

It is regrettable that despite the historic evidence and the ancient Olympic sporting heritage , Pankration was not reinstated as a legitimate Olympic Sport, during the foundation of the Modern Day Olympic Games. This travesty is recorded in history when in 1895 the Cardinal of Lyon, voiced his official decision on the reinstatement of sports to Pierre de Coubertain, [the founder of the Modern Olympic Games] by stating “Nous acceptons tout, sauf Pankration” meaning “ We accept all sports to reinstated but Pankration”