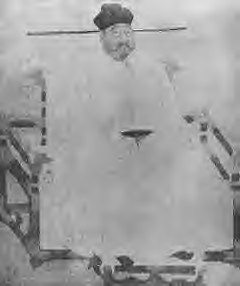 Taizu Chang Chuan or Tai Tzu Quan for short, can also be referred to a Chang Quan Kung Fu or Emperors Long Fist Kung Fu is a family of related martial arts that were invented by Chao, Kuang Yin also known as the Emperor Sung Taizu. Taizu Chang Quan means Grand Emperor’s Long Fist or Great Ancestor’s Long Fist. and is a collection of arts he practiced, mastered OR invented during his life and is one of the primary arts practiced by the Chao family today. The entire system, is sometimes referred to as the “Chao Family Fist”, as the Chao family are the direct descendants of the Emperor and ruling family of the Song dynasty.

Chao, Kuang Yin was born in 927 AD. into a military family and eventually climbed the ranks to become the General in command of the Elite Imperial Guard. He and his brother, through military combat, conquered five warring states and united them into one peaceful dynasty. He took the throne in 960 AD. He reigned until 976 AD., when he died of complications from a common illness. Accounts vary, but it seems that his brother Chao, Kuei(Sung, Tai Tzong) then took the throne until his son was old enough to rule. Chao, Kuang Yin is also known as Sung, Tai Tzu, or Great Ancestor Sung.

Sung Tai Tzu studied many arts during his life and invented two. Taizu Chang Quan Kung Fu means Great Ancestor’s Long Fist, Or Emperor’s Long Fist and refers to the External and Internal arts invented by Chao, Kuang Yin. These arts were later expanded and perfected by his descendants during the Song dynasty and the following Yuan and Ming dynasties.

Northern Taizu was the first to be developed, and was the one of only two divisions invented directly by Sung Tai Tzu himself. It all started with the original 32 move Taizu Chang Quan or Long Fist routine. This original form was documented in wood block carvings some time during his reign between 960 & 976 AD., It was also taught to the Shaolin monks for preservation, and is still practiced today in some schools. It seems to be predominantly external set, with some internal attributes. There are reportedly one or more internal Taizu Chang Quan Kung Fu sets. From what I have gathered, they are similar to the external, only performed with internal mechanics. The sets do not resemble Tai Chi construction, but are performed slowly, kind’a like a Tai Chi. They are generally said to be 32, and 64 moves in length.

Three main Long Fist styles are said to have come directly from Taizu Chang Quan. The first is the Tai Tzu Hong Chuan. Hong Chuan contains ten forms, 4 being shorter, and 6 being quite long. It is said Chao Kuang Yin developed the first 4 routines himself, and the 6 longer routines were attributed to his descendants. This appears to be the most common branch of Tai tzu. In addition to the ten core forms, there are others as well. I am not sure how many there are total, but from the lists of form names I have been sent, I think it is safe to say at least 30, maybe more. Not every branch teaches all the forms.

The next style is called the Gun(g) Fist, or “King’s” Fist boxing. It is another Chang Quan Kung Fu style said to have descended from the Chao Family and is often called the “Gun Fist of the Chao School”.

Tai Tzu Chang Quan Kung Fu was a major component of the Shaolin Temple curriculum during the Ming dynasty, and it is said that today’s Shaolin Chang Quan Kung Fu is directly descended from the Long Fist styles practiced at that time.

In 1127 AD. the Manchurians conquered much of the Song Empire. The Royal family fled south and set up their capitol there. The Emperor Chao, Zong, a former prince who was 9th in line to be emperor, took the throne and is credited with restoring the Song dynasty in the south. Once reestablished, the Chao family continued to expand and improve their art. The principals and “spirit” of the Southern Shaolin styles of the time were combined with that of the existing Tai Tzu system to form it’s newest and youngest division, the Tai Tzu Southern Long Fist. Also an external division, it contains more rooted, and “in close” fighting and uses more hand techniques than it’s more “Mobile” Northern older brother. Students that study and combine both divisions are formable fighters to say the least.

The Southern division is also similar to other Southern divisions in the respect that it shares the same strong rooted stances and looks much stiffer and rooted than the Northern Chang Chuan division. If you compare the two, you can still see the family resemblance. Southern Tai Tzu also likes to use plenty of dynamic tension in it’s basic form. It is somewhat similar Yi Jin Jing in that respect, at least in principal if not exact movement.

The Southern division is also similar to other Southern divisions in the respect that it shares the same strong rooted stances and looks much stiffer and rooted than the Northern Chang Chuan division. If you compare the two, you can still see the family resemblance. Southern Tai Tzu also likes to use plenty of dynamic tension in it’s basic form. It is somewhat similar Yi Jin Jing in that respect, at least in principal if not exact movement.

Originally, Southern Tai Tzu contained only 6 formal routines. Today, various lines can contain anywhere from the original 6 to as many as 60-70 formal routines depending on the amount of advancement and evolution a particular line has seen during it’s lifetime. Generally the first 3-6 routines are openly taught, wile the last few routines are generally closed-door sets, and only taught to potential inheritors of the system, if they are taught at all. I currently have collected and documented 4 of the core sets, and I may have a 5th, but I still have to authenticate it. I also have some documentation of drills taken form the 6th form.

It is said this division was the first to be released to the public, being taught in Southern Fujian province as early as the late Sung dynasty (1127-1279). The base form is called “San Zhen”, or “Three Battles”. It is the heart and core of Southern Tai Tzu, and is used to teach the core body structure and mechanics as well as being the primary Qi Gong for the division. San Zhen is the core root to Ngo Chor’s Sam Chiem. The Ngo Chore version was the root to the Okinawan form bearing the same name.

The internal system is generally thought to contain one, maybe two actual forms. The first may be the original 32 move form, and is relatively short. The second is said to have evolved to be as much as 300+ moves long by the Ming dynasty. I have found there are few lines that have even part of this set let alone he full thing. It is the highest form of Tai Tzu, and it appears to be a dying system in some areas. According to some oral history, the famous General Qi Jiguang knew the internal 32 move form, and that was the version he taught to Chen, Wang Ting of the famous “Chen” family to create the foundation of the Chen Taji Quan style.

Apparently the original internal 32 move form was kept a closely guarded secret. Most writings refer to it as an “external” form, but it is preformed as an internal set at it’s highest levels.

The General’s 32 move Tai Tzu form has been passed down to this day due to his documenting it in his book. It is said made up of 29 Tai Tzu techniques, and 3 of his own. It is not known if the 29 techniques were from the original 32 move form, or more representative of Tai Tzu of the Ming dynasty time period. Many claim the Generals form to be the original form developed by Chao Kuang Yin. It is important to understand that this set was documented some 500-600 years after the arts creation, and it is highly doubtful that it is 100% original. BUT, it may very well be as close as it gets. You would have to reference it to the Wood carvings of the original form supposedly held by the Chao family today to know for sure

From the original 32 move form, or possibly Qi Jiguang’s set, a more modern looking 37 move Taji Quan form was developed (Looks like VERY reacently, last 30 years or so). Currently, the Chao family has evolved that into a complete Taji system taught separately from the Tai Tzu Chang Quan Kung Fu known as Chao style Taiji Quan. This Taiji Quan system can be found both in Taiwan, and the US in several places. The Chao style Taji Quan is ALSO called Tai Tzu Chang Chuan erroneously by some practitioners.

Many believe the Chen style, was influenced by the external Tai Tzu Chang Quan Kung Fu, our Northern division. It may be partially true of course, but the influence of the Internal Tai Tzu through General Qi Jiguang most likely had a profoundly greater impact. I think this belief comes from the fact that few know that Tai Tzu has an internal division. In-fact, the internal aspect is considered the “treasure” of the system and was thus closely guarded. The external Chang Quan Kung Fu however, was considered more common and thus spread more prolifically.

Tai Tzu Quan is a strong and powerful system of martial styles, with diversity and content that is both complementary and synergistically complete. Each component of the system combines with the rest to fill gaps and weaknesses found in every division, to form one complete well-rounded system of styles. If the Northern Long Fist has a weakness, the Southern fills it, if those two have a deficiency, the Six Step Fist, Monkey Boxing and the “Closed Door” Internal Tai Tzu can then be counted on. If the Six Step Fist, Monkey Boxing and the internal style have a weakness, the Northern and Southern external systems can be used to cover for that too.