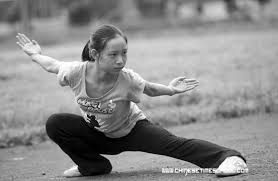 Piguaquan meaning “chop-hanging fist” in Mandarin, uses a number of sweeping actions to generate speed through the hips and arms to produce powerful strikes. Also known as Piguazhang “chop-hanging palm” due to its emphasis on palm techniques, is often taught alongside Bajiquan, “eight extremes fist” which is a style of Wushu that features explosive, long-range power.

It originated in Cangzhou, a region in Hebei Province of North China, but today is also well known in other areas, including Taiwan.

Sometimes accused of being an impractical martial art because of the exaggerated nature of its opening moves, Piguaquan’s value lies in its simplicity and its ease to master.

During middle Ming dynasty Piguaquan had already spread amongst the martial arts practitioners of the common people. During the middle Qing Dynasty there were two major branches of Piguaquan in Cangzhou. One branch led by Guo Dafa of Nanpi village, who had incredible martial prowess and later became an imperial bodyguard. Zhuo Baomei of Yanshan village, who specialized in the Qinglong forms and Pigua slow forms, led the other branch.

In 1928, the Nationalist Republic established Central Guoshu Institute where martial arts coaches Ma Yingtu and Guo Changsheng, practitioners of the Yanshan and Nanpi lineages, became friends. After in depth studying and analysis, taking the elements from the two lineages they combined it into one new style. The two professors also incorporated weaponry into the style, including Feng Mo (Crazy Demon) Staff, Pigua Dao (Pigua broadsword), and Miao Dao forms, filling the void of lacking weaponry in the old lineages.

References and sources for this Piguaquan Article

http://en.wikipedia.org/wiki/Piguaquan
The Way of the Warrior: Martial Arts and Fighting Styles from Around the World 15 Sept 2008
by Chris Crudelli