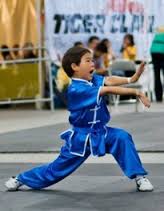 Power is driven from sharp waist movement with emphasis on fast stance transition to generate power and speed in the arms. Hand strikes called “Gua Gai Quan” (Gwa Kup Kuen) are consecutive and are aimed downward; these are followed by whipping uppercuts known as “Tao Quan”. There are relatively few kicks in Nan Quan although the Tengkong Pantui Cepu (“flying cross legs kick and land on the side”) and Li Yu Da Ting (carp skip-up) are very common in advanced Nan Quan routines. Nan Quan also has its own weapons – the Southern Broadsword (Nandao) and Southern Staff (Nangun), which were included in the International Wushu competition in 1999.

In 2003, the International Wushu Federation (IWUF) changed the rules of contemporary Nan Quan and made jumping techniques mandatory in Nan Quan routines. Jump kicks spinning in mid-air between 360 and 720 degrees before touching the ground are now used in all Nan Quan forms along with stationary Back Flips and Single Step Back Tuck for advanced competitors.

References and sources for this Nan Quan Kung Fu Article

http://en.wikipedia.org/wiki/Nanquan
The Way of the Warrior: Martial Arts and Fighting Styles from Around the World 15 Sept 2008
by Chris Crudelli