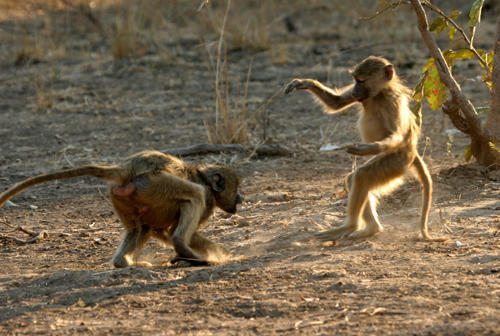 Monkey Kung Fu was developed by Wang Lang, who had already forged the Praying Mantis kung fu system, found yet another breakthrough while walking in the forests in the mountains. He saw monkeys picking fruits from a tree. As quietly as possible, he approached the tree, yet before he could reach it the monkeys saw him, and instantaneously jumped away. Without thinking, Wang Lang raced after them using his well-trained “nimbleness technique”. Amongst the trees, the monkeys rolled, trotted and jumped, and he was soon left far behind. Panting, Wang Lang wiped off his sweat and laughed.

Thinking back to what he had just seen, he imitated and analysed the monkey’s leg movements. They were exactly what he had been searching for! and thus Monkey Kung Fu was formed.

The way the monkeys advanced, retreated, dashed, jumped and turned, proved to be more alive than all the big steps and broad stances used in all the other martial arts of that time. From these observations, he designed the “Monkey steps” which are characterized by narrow paces and quick legs. This would enable better speed and spirit in moving. The “Eight Basic Stances” were combined with the well known “Thirteen Arm and Hand Techniques”. Thus the skill of the Praying Mantis Kung Fu and the liveliness of the monkeys was joined.

For the practical use of Praying Mantis forms and techniques, Wang Lang included a number of axioms to highlight key points of his new style:

· Hands are doors; legs reach out.
· Hands be brisk as shooting stars, eyes keen as lightning.
· Body goes like dragon and legs like arrows.

These axioms mean that in this Monkey Kung Fu, most of the upper body techniques are mainly to block, protect, or undo the attacks of the opponent. The major task of counter-attack for Monkey Kung Fu lies in the legs. That is, the hands and upper body are used to safeguard oneself and occupy your opponents attention, while exerting attacks chiefly with the legs. To do this, you must skillfully match hand and leg movements, making most use of the right timing, distance and position.

Wang Lang also set down some somewhat chivalrous rules in fighting for his Monkey Kung Fu students to follow long before the Marquis of Queensbury. These rules described parts of the body that you could or should not hit, for morality’s sake. He wanted his followers to value high morals as well as excellent fighting techniques, so as to develop a supreme Martial Art.

References and Sources for this Monkey Kung Fu article