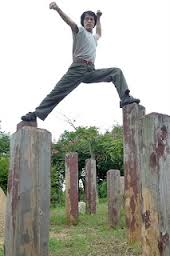 Mei Hua Quan, meaning “Plum Flower Fist” in Mandarin is thought to have originated in the 17th century in northern China. Practitioners learn fist, hand and foot techniques, which are based around five static training stances. They are also taught eighteen traditional weapons such as the Qiang (Spear), Shuangdao (Double Sabre), Dadao (Alebard) and the Liuxingchui (Meteor Hammer). The art is known for its health benefits as well as self-defence.

A similar system is “Mei Hua Zhuang”, where “Zhuang” means “Trunks” or “Pillars”. The name is said to come from the ancient way of training where by techniques were performed while standing on wooden pillars. This method was used to develop good balance and quick light footwork. It was thought that training for long periods of time on the pillars would improve overall coordination and increase confidence when fighting on the ground. Originally a secret style, the art gradually began to open its doors to outsiders, and training routines were implemented to ensure that practitioners had the determination, skill and moral qualities to study the art. During the first three years of training students were monitored, and those found lacking would no longer receive tuition. Those who passed the rigorous training would spend the next couple of years adding to the skills they had learnt during the first year.

References and sources for this Mei Hua Quan Article

http://en.wikipedia.org/wiki/Meihuaquan
The Way of the Warrior: Martial Arts and Fighting Styles from Around the World 15 Sept 2008
by Chris Crudelli