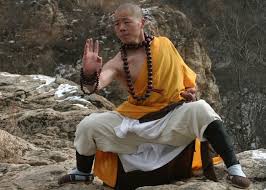 It is believed that monks in the Shaolin Temple created Luohan Quan by copying the facial expressions of the statues of “Arhats” (saints or sages) and developed 18 movements based on those expressions.

Arhats, is a general name for all the styles of Chinese martial arts that are named after the Arhats. Luohan style is the oldest and the representative style of Shaolin Kung Fu, so that the name Luohan Fist is sometimes considered an equal name for the whole vast system of Shaolin Temple martial arts.
A further 24 movements of advancing and retreating during combat were also developed, and the system now has a total of 108 different movements. These include 6 forms, which incorporate locks, kicks, punches, throws and takedowns.

Luo han quan is considered a completely pure Buddhist Shaolin style. It is the most famous, and of the most important styles of Shaolin Kung Fu. Luohan Quan was created in the early ages of Shaolin Temple, but it was first officially documented by Shaolin monks in the “Shaolin Kung Fu Manual” in the early years of the Song dynasty in 960s AD. This style has two forms called small (xiao) and big (da) Luohan Kung Fu, which are considered the oldest excellent styles of Shaolin Temple. Small LuohanQuan has 27 postures/36 movements and big Luohan Quan has about 54 postures/72 movements, so 108 movements in total. Big LuohanQuan is itself divided into 3 smaller 18-posture forms. Shi Deyang, a 31st generation Shaolin monk, talks about 6 forms of DaLuohanQuan, but most people only know these 3 forms. The first 2 forms/sections of big Luohan Quan, which has 36 postures in total, is an ancient form called golden child xiaoluohanquan (jin tong xiao luo han quan). Shaolin small and big Luohan Quans are also practiced by the folk people of Dengfeng area around Shaolin in a less Luohan-imitative version, which drops out or simplifies the Luohan-imitating postures of Shaolin original Luohan Quan. Shaolin Luohan Quan movements, though simple, are highly advanced and deceptive. Attack and defense are masked by Luohan Buddhist postures and come out from unlikely angles.

References and sources for this Luohan Quan Article

http://en.wikipedia.org/wiki/Luohan_(martial_arts)
The Way of the Warrior: Martial Arts and Fighting Styles from Around the World 15 Sept 2008
by Chris Crudelli