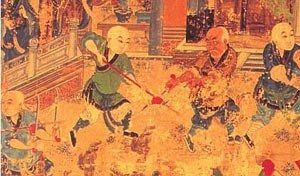 Martial Arts have been developing in China for over 4000 years. The Ancient Egyptians had a stylised form of unarmed fighting recodered in tomb murals as early as 3500BC. The Greek poet Homer (8th Cent) has very detailed descriptions of fighting method, and Plato (428-348 BC) describes a kind of shadow boxing called skiamachia.

Some believe that Alexandra the Great brought Martial arts to China. The Yellow Emperor – Huang Ti believed to be a shaman and the originator of the first recorded Martial Art. So the marriage between Martial Art, Spirituality and Self-realization was born at the outset.

Some legends say it all began when a stern Indian Monk, known as Bodhidharma (or Dot Mor) who came to the Shaolin Temple in 527 AD.

What ever the legends and history books say, I’ll guess no-one will be sure for certain, but the amount of trade China has had with the rest of the world over the last 4000 years, it’s very likely that Chinese Kung Fu have been influenced continuously as much as it has influence other martial arts that have spread out all over the world.

The martial arts aspect was developed through a necessarily for defence as much as anything else and vulnerable villages, temples, all worked on a way to defend themselves. Some became complete systems and have been handed down through family lineage or schools until the present day.

My interpretation is that during long times of peace and more health philosophy naturally developed, hill people had the time and during warring times, much harder fighting styles developed. Ths is probably true for all styles of martial arts around the world.

The term ‘Gung Fu’, or ‘Kung Fu’ was created by Chinese who migrated to California for the 1800’s Gold Rush and the building of the Transcontinental Railroad. Seperately Kung means energy, and fu mean time. Kung Fu (or Gung Fu, in Cantonese) can be interpreted to mean ‘Hard Work’, ‘task’ or ‘always learning’. So this phrase can also be applied to other skills such as music, and art. The more common terms in China are ‘Wu Shu’ meaning Martial Art, or ‘Chuan Fa’ meaning fist fighting. Sometimes the term Wu Kung is used which transaltes as Martial Kung Fu.

Choy Gar - Choy Gar, meaning "Rat and Snake Style Combined". The exact origins of Choy Gar are unclear. The art is believed to have been developed during… Continue Reading

Di Tang Quan - Very little is known about the origin of Di Tang Quan, but it is thought to have become popular during the Southern Song Dynasty (1127… Continue Reading

Dragon Kung Fu - The origins of Southern Dragon kung fu are hard to place since most of the history is oral, very little being written down. Southern Dragon… Continue Reading

Emei Quan - Emei Quan meaning “Emei Fist” in Mandarin, is a style of Chinese martial art named after the Emei Mountains, which are located in the Szechwan… Continue Reading

Fan Zi Quan - Fan Zi Quan (Chinese: literally "Rotating fist") is a Chinese martial art that emphasizes offence and defence with the hands. Its movements have been described… Continue Reading

Five Ancestors Fist - During the 13th century a Shaolin monk named Bai Yufeng, combined the five Shaolin styles into one syllabus to develop his own system, known as… Continue Reading

Huaquan - Huaquan Kung Fu, also know as China-style boxing system, is a style of Long Fist Kung Fu (Changquan). It is believed to have originated in… Continue Reading

Hung Gar - Hung Gar Kung Fu is a form of self-defense originating from the Fujian Shaolin Temple hundreds of years ago. The Shaolin Temple was founded in… Continue Reading

Jeet Kune Do - The Jeet Kune Do History started when it was created by the late Bruce Lee. Lee felt discontented with the traditional martial arts. He felt… Continue Reading

Leopard Kung Fu - Leopard kung fu began as a southern style that has seen some northern influence in the form of Panther. Leopard is construed as a soft… Continue Reading

Monkey Kung Fu - Monkey Kung Fu was developed by Wang Lang, who had already forged the Praying Mantis kung fu system, found yet another breakthrough while walking in… Continue Reading

Shaolin Temple Kung Fu - Toward the end of the 5th Century AD an Indian Buddhist monk by name of Ba Tuo was traveling through China teaching Buddhism, helping and… Continue Reading

Snake Kung Fu - There is precious little written material available about the snake kung fu styles, although they are foundation sets in traditional Shaolin, family styles, and are… Continue Reading

Tiger Kung Fu - The tiger plays a great role in Chinese history and mythology, so it is only fitting that the beast should be chosen as one from… Continue Reading

Tong Bei Quan - Originating in the 17th century Tong Bei Quan, meaning ‘Spreading Power from the Back Boxing’, as Tong means ‘through’, Bei means ‘back’ and Quan means… Continue Reading

White Crane Kung Fu - White Crane kung fu History show that it came from Tibet. The legend of its beginnings is with an old man who would contemplate daily… Continue Reading