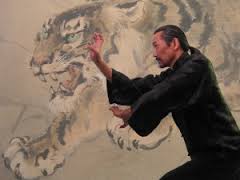 The Five Animals Kung Fu style is a prevalent form of martial art that is commonly found in southern China. The style includes elements of Tiger, Crane, Leopard, Snake and Dragon. An alternate selection that is also widely used is the crane, the tiger, the monkey, the snake, and the mantis.

According to legend the Five Animals Kung Fu martial arts originated from the Shaolin Temple in Henan province during the 13th century. One of the temple’s monks, Jueyuan, started with the “18 Luohan hands” – the original 18 techniques of Shaolin martial arts; and expanded them to 72 forms.

In a quest to develop his art further, he traveled to the city of Lanzhou, Gansu Province in the west of China and met Li Sou, a master of “Red Fist” Hongqaun. They both traveled back to Henan province, and Li Sou introduced Jueyuan to Bai Yufeng, a master of the internal arts. Together all three expanded Jueyuan’s 72 forms into approximately 170. Using their combined knowledge, they restored internal aspects to Shaolin boxing. They organized these techniques into Five Animals: the Tiger, the Crane, the Leopard, the Snake and the Dragon.
Jueyuan is also credited with the Northern style “Flood Fist” Hongquan, which does not feature the Five Animals but is written with the same characters as the Southern style Hung Kuen, perhaps the quintessential Five Animals style.
Moreover, as in the Southern Hung Kuen, the “Hong” character in Hongquan actually refers to a family name rather than its literal meaning of “flood.” However, the two styles have nothing in common beyond their shared name.

As a martial arts style, Five Animals can be categorized by its use of palm, fist and claw techniques; and by the effective way in which power is generated in the waist, before being whipped violently into the hand and used against opponents. Qi-gong breathing exercises are also commonly practiced in this style.

In Mandarin, “wuxing” is the pronunciation not only of “Five Animals,” but also of “Five Elements,” the core techniques of Xingyiquan, which also features animal mimicry (but of 10 or 12 animals rather than 5) and, with its high narrow Santishi stance, looks nothing so much like a Fujianese Southern style stranded in the North.
Although the technique is mainly associated with the tiger, dragon, snake, crane and leopard, many other animal styles have been developed, including panther, praying mantis (northern and southern styles), horse, cobra, bull, wolf, deer, bear, boar, eagle, python, scorpion, elephant, lion, frog, duck, dog, crow, tiger cub, chicken, hawk, turtle, swallow, lizard and a host of others.

References and sources for this Five Animals Article

http://en.wikipedia.org/wiki/Five_Animals
The Way of the Warrior: Martial Arts and Fighting Styles from Around the World 15 Sept 2008
by Chris Crudelli