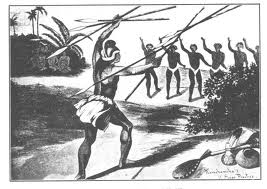 Maculele has its origins steeped in waters as murky as those which surround the origin of capoeira. Some say it came from Africa. Some say it came from indigenous Brazil. One story features slaves on a sugarcane plantation; another features two tribes at war. What is agreed, however, is that Maculele is a warrior dance—clashing blades, flying sparks, and heroic movements all blend together in a whirlwind performance against the pounding of hypnotic drums.

One of the most popular origin stories of Maculele attributes it to African slaves working on the sugarcane plantations in Brazil. The Maculele sticks were to represent stalks of sugarcane, and machetes the large knives used to cut them. Slaves, according to this theory, either formed the dance for entertainment in the fields or senzalas while resting between work, with the dance movements representing the motions of cutting sugarcane; performed it to vent their anger and frustration; or, like capoeira, practiced it as a form of self-defense disguised as a dance, later using the sticks, knives, and movements to protect themselves from physical punishment. Maculele performances have also been known to use flaming torches in place of sticks or machetes; these represent the sticks some say slaves used to fight their “captains”, which were pulled, still burning, from the fire.

The other principal version of Maculele’s origins features a village hero, and there are variations even within this. As the story goes, all the men of a village went hunting and fishing one day, and left only one man or one boy to protect the rest of the village (i.e. women, children, and the elderly). An enemy village attacked, and the hero fought them all off with only a pair of wooden sticks he picked up off the ground. In some versions he dies in the attempt, but always when the rest of the village men return, they celebrate his bravery and spirit, creating the dance of Maculele (possibly the hero’s name) in his honour. This story is said by some to have taken place in Africa, and one source goes so far as to give specifics: it was not one man, but 22, and they were from a village in Nigeria.

Finally, Maculele seems to be partly yet very strongly rooted in the indigenous culture of Brazil. Popular Brazilian legends tell the same tale of a sole man or boy fighting off an entire enemy tribe and saving his own, then being celebrated in the dance of Maculele. According to one, the battle was actually part of an ongoing conflict between two tribes, a warlike one and a peaceful one. The latter could not defend themselves against repeated attacks by the former, until during one attack, a young boy named Maculele ran around with such ferocious energy holding two sticks in his hand that the warlike tribe never came back.

There is much talk of African culture having mixed with Brazil’s indigenous culture in the creation of Maculele , especially as the dance resembles some Brazilian aboriginal ones. A study by Manoel Querino, on the other hand, claims that Maculele was actually derived from the Cucumbi natives in Angola, whose battle traditions involved a “more elaborate and complex warrior dance” that “included group dance formations simulating actual combat”.

That’s it for how Maculele came to exist in the first place, but what happened after? How did this “dance of sticks” migrate from indigenous tribes, whether in Africa or Brazil, into the academies and performances of capoeira schools today?

That would be thanks to one Paulino Alusio de Andrade, also known as Mestre Popo do Maculele , in the city of Santo Amaro. Apparently, Mestre Popo first used the movements of this near-forgotten dance in the street, with a friend to attract the attention of women. Then, he gathered family and friends in 1943 in order to teach them Maculele based on his memory. He refined and revived it through a folkloric dance company called Conjunto do Maculele de Santo Amaro, with the intention of reintroducing Maculele in local religious festivals. As a result, Mestre Popo is now considered by some to be the father of Maculele in Brazil.

If Mestre Popo is the father, Santo Amaro may well be the home. A city in interior Bahia, Santo Amaro is known for its African cultural heritage, which strongly includes Maculele . Incidentally (or perhaps not so incidentally), Santo Amaro is apparently also known for “the green of its sugarcane fields”. It’s not surprising then to hear that Maculele is supposed to have developed in the sugarcane fields of Santo Amaro, where the dance has been performed in local festivals for over 200 years. It is a leading number in the Nossa Senhora de Purificacao (Our Lady of Purification) festival every February, and plays a role in other religious and harvest festivities as well.

Although no one knows exactly how old Maculele is, the role it played in Santo Amaro is unmistakeable, with records such as the following newspaper obituary, published inO Popular, December 10, 1873:

“On the first of December the African Raimunda Quiteria passed away at the age of 110. In spite of her age, she still used to cut the grass and sweep the front and back of the ‘Church of Purification’ for the Maculele festival.”

The popularity of Maculele declined after the abolition of slavery in 1888, coinciding with the death of great Maculele masters in the early 1900s, until it was revitalized by the efforts of Mestre Popo (purely for the tourism, one source claims). Now, the dance takes centre stage once again, especially among festivities in northeastern Brazil. As for Maculele ’s association with capoeira, this supposedly began in the 1960s, through the students of Mestre Bimba. Many capoeira groups today incorporate Maculele into their schools due to its similar Afro-Brazilian roots to those of capoeira.

Maculele is immediately recognizable for its dramatic, expressive motions, high-energy performances, spectacular choreography (if applicable), and mesmerizing rhythms. The sticks, called grimas, were originally 24 inches long and 1 1/8 in. thick, but today have a range of 12-20 inches. Traditionally, grimas are made of biriba wood, the same used to make berimbaus. Maculele knives, normally machetes, are called facãos, and they were traditionally around 40cm long (about 16 inches).

The dance is performed to a 4-count rhythm: for three beats, players strike their own sticks (or knives, or flaming torches) together in combination with expressive and athletic movements, and every fourth beat, partners strike their right-hand sticks together. Grass skirts are normally worn for performances, and sometimes bodies are painted. Although today many Maculele performances are choreographed and have dancers performing movements individually in straight lines, true Maculele is done in a roda just like capoeira is. Someone begins singing, then two people enter and begin to play.

According to one source, the original basic step of Maculele was a “broken gingado” similar to that found in frevo, but through the years has been turned into “a hardened ginga with little swing”.
Maculele songs are sung mostly in Portuguese as well as in Yoruba, one of the languages spoken by the African slaves in Brazil. Songs can lament working in the sugarcane fields, celebrate the abolition of slavery, recall the bravery of the hero Maculele , or evoke the battles of Brazil’s indigenous peoples. Up to three atabaques may be used for the accompanying rhythms, one of each type: Rum (large), Rum-pi (medium), and Lê (small). The rhythms usually associated with Maculele are the congo, afoxé, and barra vento.