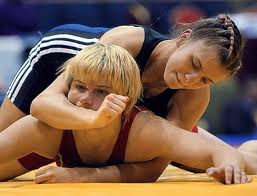 Luta Livre History seems to be the forgotten son of the grappling arts. Its “big brother” rival Brazilian Jiu-Jitsu has had the tremendous success that we all know, and has chang
Luta Livre means “wrestling” in Portuguese, although the term Luta translates to ‘fight’ and Livre translates to ‘free’. Therefore, loosely the term means ‘free fighting’. Luta Livre is a fighting style based on catch wrestling founded by Euclydes “Tatu” Hatem . Tatu beat George Gracie by submission in 1940. After Tatu, fighters such as Euclides Perreria and Roberto Leitao continued the sport and made the art evolve. Perhaps even more so, the art was later positively impacted by Leitao, a wrestling and judo practitioner. This University professor of Engineering learned to use technique over raw force- similar to Helio Gracie- due to the fact that he was a smaller man and helped to refine several techniques of the art. Though Leitao certainly used leverage to his benefit, his words to Fight! Magazine note a major difference between the philosophies of Brazilian Jiu Jitsu and Luta Livre, with Luta Livre following an ideology more akin to what catch wrestling or shootfighting might.ed the martial arts world since UFC1 while Luta Livre stayed in the shadows. Most grapplers don’t even know what Luta Livre really is or its history.

Regardless, during the 1980?s and 90?s, the majority of the fights/challenge matches between the two arts went to Brazilian Jiu Jitsu, not Luta Livre, which, along with a lack of finances- due to the fact that Luta Livre has always been considered more of a poor person’s art than jiu jitsu, which was more for the elite- declined in the eyes of MMA historians and practitioners.

Luta Livre looks a lot like catch wrestling, in that takedowns, takedown defense, and ground control are emphasized, as are submissions on the ground. Since Luta Livre practitioners recognize that most fights go to the ground, ground fighting is the number one priority. That said, striking of the Muay Thai variety is also currently taught within the style. 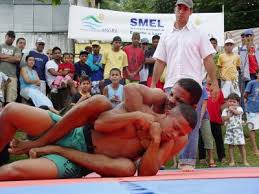 The goal of Luta Livre is to take down and submit an opponent as soon as possible. Again, since striking is taught, the goal might also be to stop an opponent with strikes. That said, Luta Livre is primarily a grappling art, so the tendency would be to go with the former.

There have been three famous fight between Brazilian Ju Jitsu and Luta Livre.

Rickson Gracie (BJJ) vs. Hugo Duarte (Luta Livre): Duarte, a disciple of Luta Livre, said something insulting about Rickson Gracie’s family on a Brazilian beach. Rickson, widely considered today to be the greatest of all the Gracie fighters, slapped Duarte after the insult and a fight ensued that was caught on camera by a tourist.
In the end, Rickson mounted Duarte and pummeled him into submission. This fight held great importance for the Gracie’s as the tape of it was later used as a marketing tool to sell Gracie Jiu- Jitsu’s effectiveness.

Walid Ismail (BJJ) vs. Eugenio Tadeau (Luta Livre): After Tadeau defeated a BJJ fighter by the name of Renan Pitanguy, Ismail, a Carlson Gracie product, was angry. But years later, after Royler Gracie fought Tadeau to a draw without wearing a gi (an insult, in a sense, considering that Gracie Jiu Jitsu was somewhat founded on the gi), Ismail challenged Tadeau in the media. The fight ended in the second round when the Brazilian Jiu Jitsu practitioner threw Tadeau out of the ring, where he was counted out. Later, Tadeau claimed that BJJ supporters didn’t allow him back into the ring, while BJJ fans/practitioners indicated that he was either too afraid to reenter the ring or was hurt.

So what were the reasons for Luta Livre’s failure to breakthrough to mainstream martial arts like Jiu-Jitsu did?

In this article from bloodyelbow.com, some of the reasons for Luta Livre’s failures seem to be the lack of success at the highest level of MMA (while Jiu-Jitsu has great success in MMA), combined with a the fact that the talent pool is smaller in LL:

“Unlike the other top camps, none of the Luta Livre guys ever achieved greatness in modern MMA, they suffered from their jack-of-all-trades approach (well rounded but brilliant at none of the aspects of MMA). They couldn’t strike as well as Chute Boxe, certainly couldn’t outwrestle Hammer House, couldn’t out grapple the jiu jitsu fighters, and weren’t as athletic as the Lion’s Den.

The sudden popularity of no-gi grappling in events such as ADCC, broke down the jiu jitsu camps’ resistence to no-gi grappling;
The professionalization of MMA which ended the blood-feud between Luta Livre and Jiu Jitsu and resulted in so many LL fighters moving to the larger jiu jitsu camps.

Also according to LL fighter Marcelo Briguadeiro: ”Why does BJJ have many more successful representatives in MMA and grappling comps than LL has?”. It is an easy answer: its all about mathematics. For each LL fighter there are 1,000 BJJ fighters … which has the best chances to find 10 exceptional talents among its representatives.”

The future however doesn’t look so grim for Luta Livre as a new generation of fighters are having success in MMA such as the Renovacao Fight Team (RFT) which is run by Master Marcio “Cromado” Barbosa , who defeated on his MMA debut Caol Uno! Fighters to look out for in MMA are amongst others Terry Etim, Paul Sass, Falcao, “Betao” Nogueira and “Junior PQD.”

Read more about Luta Livre History at these websites here: