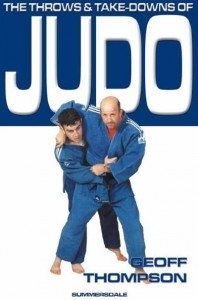 The Throws and Takedowns of Judo: What the Blurb says

Ground fighting is taking the martial arts world by storm, but how do you get to the ground safely and end in a prone position? What are the dangers of throwing and taking an opponent over? In this book on throwing and take-down techniques of Judo, the author teaches how to control vertical grappling and destroy an assailant with a demolishing throw. Including the original “blow before throw” techniques banned from sport grappling at the beginning of the century.

The Throws and Takedowns of Judo:What Enso Martial Arts Says

Let’s be honest, no-one really expects to learn from a book on it’s own. It didn’t work for Daniel Larusso in Karate Kid, it won’t work for 99% of people in general. This book has a bit of a consign title in that you’d expect it to be a Judo book for Judoka. Once you see who wrote it you can expect it be more focused on self defence and MMA style training.

If you are new to martial arts, how would you know, but then you wouldn’t know much about martial arts anyway so the book might be of some use. For a Judoka wanting to improve their Judo, it is no use at all. For a Self Defence practitioner or MMA fighter again it won; the that much use, although it will give an idea of what throws are useful to learn, should you want to do a little cross training.

So what is the point of this throws and takedowns book, well it’s gives someone wit not much background in Martial arts an idea of what techniques may be useful should they want train in self defence and concentrate on throwing. It also may be mildly useful for someone doing Judo wanting to explore the self defence aspects that have been taken away form the modern day judo training. Apart from that, not a great book. Sorry Geoff

Moving Zen: One man’s journey to the heart of Karate