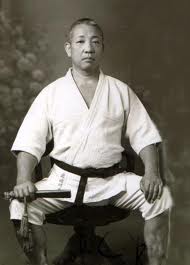 Danzan Ryu Ju Jitsu: Henry Okazaki was born in Fukushima Prefecture, Japan in 1890. In 1906, he immigrated to the island of Hawaii. Soon arfter, he was afflicted with a pulmonary condition which may have been tuberculosis. It was during this time, however, that young Okazaki began studying under Yoshin-Ry? jujutsu sensei by the name of Yoshimatsu Tanaka in Hilo, Hawaii. Okazaki intensely pursued his studies under Tanaka and he found after sometime that his respiratory condition had gone into remission. Okazaki felt that the study of martial arts had played a large role in his physical recovery and as a result he decided to dedicate his life to the study and teaching of Danzan Ryu Ju Jitsu and related disciplines. Later in his life he would adopt the western name, Henry.

In 1924, Okazaki returned to Japan and underwent a study of the various schools, or ryu, of the then most popular Ju Jitsu styles of Yoshin-ryu, Namba-Shoshin Ryu, Iwaga Ryu, Kosogabe Ryu, Kodokan Iaido, and several others. Later that year when he returned to the Hawaiian Islands, he continued the study of Danzan Ryu Ju Jitsu under the various masters who had emigrated from Japan to Hawaii.

Okazaki’s school was founded in Hawaii. The name Kodenkan may be translated as ‘The School of the Ancient Tradition’ or as ‘The School in Which Senior Students Transmit the Tradition.’ Both translations are accurate . Okazaki’s method of instruction prescribed that senior students to teach their junior students in the spirit of mutual assistance. Okazaki declared that this method of instruction was the foundational philosophy of the AJJF; Okazaki called this philosophy kokua, which in Hawaiian is defined as to mutually help one another. Another notable aspect of his philosophy was that he was willing to teach both people of non-Asian extraction and women the arts. This was frowned upon by parts of the Asian community in Hawaii at that time. By all accounts the original classes were grueling, and as below, Okazaki taught different courses to different individuals. (Esmailzadeh 1)

Around the time of the founding of Kodenkan it took approximately four years to earn a Shodan ranking. During this time students trained 6–7 days a week to only traditional Danzan Ryu Ju Jitsu, but also Hawaiian Lua, Okinawan Karate, Eskrima, Kung Fu, and wrestling, he began to synthesize the most effective aspects of these varies styles into an eclectic system which he called ‘Danzan Ryu Ju Jitsu’. Okazaki used this name to honor his Chinese martial arts teacher, Wo Chong. 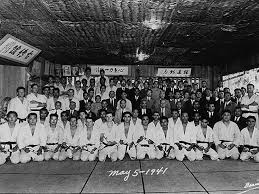 During wartime, Okazaki continued teaching and also assisted the US military in creating a hand-to-hand combat curriculum (based largely on the 120 Commando Technique list). Ironically, at the same time, Gichin Funakoshi, the father of modern Karate, was responsible for hand-to-hand training of many members of the Japanese military (Funakoshi 88). Okazaki is sometimes said to have been responsible for the WWII US Army Field Combatives Manual FM 21-150, but there is no evidence of this (and substantial evidence to the contrary), and the techniques shown are only remotely similar to Danzan Ryu Ju Jitsu. It is true that Danzan Ryu Ju Jitsu was the basis for some Military Police training manuals in the 1950s, largely through the teaching efforts of Richard Rickerts, one of Okazaki’s most senior students.

Okazaki suffered a stroke in July 1948, from which he recovered somewhat in 1949, when he continued teaching. Okazaki died on July 12, 1951 at the age of sixty-two. He left a rich martial arts legacy which has grown and branched for more than fifty years.