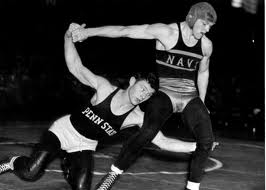 Wrestling has been popular throughout recorded history. Origins of the sport can be traced back 15,000 years to cave drawings in France. Early Egyptian and Babylonian reliefs depict wrestlers using most of the holds known to the present-day sport. In ancient Greece, wrestling occupied a prominent place in legend and literature; wrestling competition, brutal in many aspects, was the supreme contest of the Olympic Games. The ancient Romans borrowed heavily from Greek wrestling, but eliminated much of its brutality. During the Middle Ages wrestling remained popular and enjoyed the patronage of many royal houses, including those of France, Japan, and England. Early American settlers brought a strong wrestling tradition with them from England.
Amateur wrestling bouts have been contested since colonial days, yet it was not until the late 1880’s that organized tournaments of an annual nature were established. The most enduring of the organizations, which conducted such tournaments has been the Amateur Athletic Union. Amateur wrestling was primarily restricted to athletic clubs then, but it gradually spread to the college scene. In 1900 the first inter collegiate wrestling meet was held, a contest between Yale and the University of Pennsylvania. Soon other eastern colleges organized teams leading to the formation of the Eastern Inter collegiate Wrestling Association in 1904. By 1916 Penn State, Iowa State, Iowa, Nebraska, Oklahoma State, Navy, and many other colleges were fielding teams. There were no official NCAA rules until 1927 so variations of the AAU catch-as-catch-can rules were used in most early dual meets. Weight classes and rules often had to be agreed upon in advance by the coaches. A set of collegiate wrestling rules had been drawn up by the Collegiate Wrestling Rules Committee of the NCAA by 1925 but they were not required. The colonists also found wrestling quite popular among the Native Americans. Amateur wrestling flourished throughout the early years of the nation, and served as a popular activity at country fairs, holiday celebrations, and in military exercises. Of the early American styles, only the catch-as-catch-can style survives, and it has evolved into the modern form of collegiate wrestling. 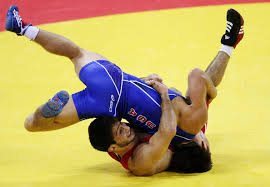 Collegaite Wrestling equipment has progressed greatly since the 1920’s. While heavy but movable mats were available, the floor of the University of Illinois collegiate wrestling room was covered with three inches of sawdust topped off with a canvas cover. The NCAA at that time recommended a minimum mat size of a twenty foot square.
The most outstanding difference in the early NCAA rules frorn those of today is the manner of awarding a decision. When a fall does not occur in a collegiate wrestling match today, the decision is awarded to the wrestler who has scored the most-points, however, no point system for determining winners of college matches was in use in the 1920’s or 1930’s! According to the 1929 NCAA rules, if a fall had not occurred by the end of the standard ten minute match the referee could (1) declare a winner based on aggressiveness, skill, and riding time, or (2) call for two 3-minute periods of overtime. It was even possible for both wrestlers to score a fall during the progress of a bout, the victory then going to the wrestler with the fastest fall. A fall was registered in 1929 after a silent count of three seconds by the referee. By today’s standards one of the most remarkable early NCAA rules (1925) was the responsibility of the referee to restart wrestlers in the same positions as when they went out-of-bounds: 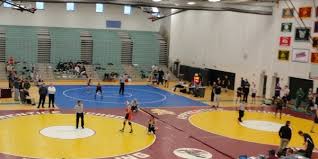 The modem college rules call for seven minute matches and a one-second fall. The first period is three minutes long and begins on the feet, while the second and third periods are each two minutes long and begin in the referee’s position (Figure 15). A fall at any time terminates the match, but when one does not occur the winner is the wrestler who has scored the most points.
The rules for American Collegiate wrestling style require that both wrestlers continually attempt to improve their position or pin their opponent. The only holds which are disallowed are those of obvious danger such as twisting a joint or strangling. The referee (Figure 18) sees that the rules are properly applied. While only seven weight classes were used in 1925 and eight in 1929, there are now ten ranging from 125 pounds (or less) to 285 pounds (or less). A great variety of techniques are commonly employed in college wrestling including the single-leg (Figure 18), cross-body ride (Figure 19), and the double-leg.

Read more from these websites about American collegiate wrestling: